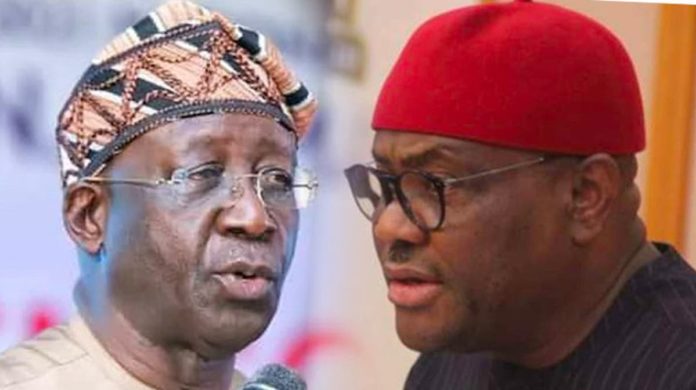 Rivers state governor, Nyesom Wike, on Thursday insisted that it is against the constitution of the Peoples Democratic Party (PDP) for the national chairman and presidential candidate to come from the same region.
Speaking at the inauguration of a campus of the Rivers State University in Ahoada east LGA of the state, the resignation of the PDP chairman of Board of Trustees (BoT), Walid Jibrin, is not the issue in contention.
Jibrin announced his resignation on Thursday, saying he was stepping down allow peace to reign in the party.
The PDP has been in crisis since former Vice-President Atiku Abubakar emerged as party’s presidential candidate in May.
But Wike maintained that Jibrin’s resignation is not the issue the party should focus on.
“They said Jibrin should resign. Who is talking about that? Do you want me to accept that the candidate and the chairman should come from the same place?
“I asked them to tell me the truth and they said no. I don’t like people when you are talking, they will say ‘interest of Nigerians’. Who defines the interest of Nigerians, you?
“You that refused to obey the constitution of their party, are you speaking in the interest of Nigerians?” The governor said.
Meanwhile the National Executive Committee (NEC) of the party has passed a vote of confidence in its National Working Committee (NWC).
The Minority Leader of the House of Representatives, Ndudi Elumelu moved the motion at the NEC meeting on Thursday.
The motion, which was seconded by Ishola Balogun-Fulani, from Kwara state, was put to a voice vote by Adolphus Wabara, the acting chairman of the party’s BoT.
The development comes amid the calls for Iyorchia Ayu, National Chairman of the party, to resign from his position.
Elumelu said the PDP has the solution to the challenges facing Nigeria and called for unity among party members.
“We must learn to forgive one another. All of us cannot be chairman, presidential candidate, but together, we can lead. If only we can be patient, we can lead.
“National cake of Aso Villa is too much for all Nigerians. And this cake means creating the necessary infrastructure for Nigerians, not making fake promises like APC.
“A lot has gone wrong. Let’s put behind the anger and move forward. It is the devil that is trying to stop us from winning because they know, in the spiritual realm, we have won. We can never be distracted. We must talk to our people to collect their PVCs.
“On behalf of my colleagues, we have decided, because the NWC has tremendously performed. Our governors are proud; forget what you are reading. They are united. I believe they will deliver their states for PDP come 2023”, the lawmaker said.
Speaking after the vote of confidence was passed on the NWC, the party’s Presidential candidate and former Vice President, Atiku Abubakar, said the PDP will resolve its crisis and win the 2023 elections.
He said, “Family disagreements are normal. We are determined to resolve those internal disagreements. Disagreement should be removed within the party’s constitution and the rules guiding the party”.
Also speaking, Wabara called on party members to stay united and mind their utterances.
“The PDP has an inbuilt mechanism to solve problems. We have done it several times. When people expect us to implode, that is when we become very glorious,” he said.