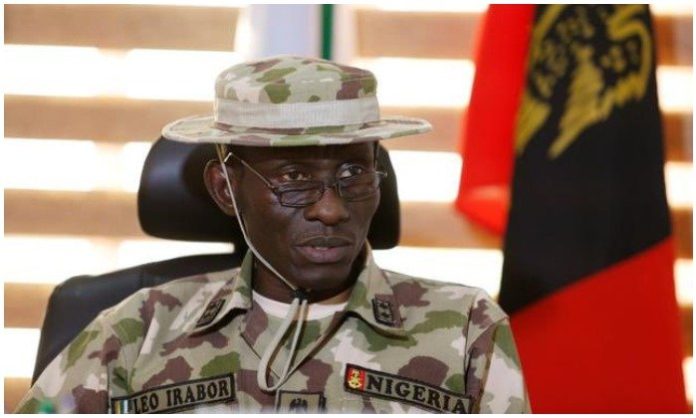 The Chief of Defence Staff, Lt-Gen. Lucky Irabor, has declared that the days of perpetrators of violent attacks in the southern part of Kaduna state were numbered as the military was prepared to unleash the full strength of its arsenal on them.
Irabor stated this on Thursday in Kafanchan, the headquarters of Jema’a Local Government Area during a peace parley with stakeholders in Southern Kaduna.
He said that the military was determined to restoring lasting peace and harmony in the southern part of Kaduna state.
“We are committed to ensuring that peace is restored in this part of the country.
“However, for those who do not want to heed our appeal for peace and who think that violence is what they need to unleash on us, I am here to tell them that their days are numbered”, he said.
The CDS said, “If the peace in Southern Kaduna is disrupted, indeed the peace in Nigeria will be disrupted because Kaduna is central to the existence of Nigeria”.
Irabor urged residents of the area not to take the laws into their hands in the face of provocations, and called on aggrieved parties to always recourse to the law.
He pledged to increase military presence and hardware in area but stressing however that military presence alone will not bring peace if the people are not willing to embrace peace.
“You can have all the personnel and equipment in the world, if there is no willingness amongst the people to live in peace, it will count for nothing.
So, we need to start looking at ways beyond military deployment to solve this crisis,” he said
He called on communities to set up security committees as well as vigilante groups to work in collaboration with security forces to fish out criminal elements.
On stoppage of night grazing as suggested by some stakeholders, Irabor promised to bring up the issue as a point during the National Security Council meeting.
“This is not something I have authority to make a decision on, but I can assure you I will bring it up as a point during the National Security Council meeting for further consideration,” he said