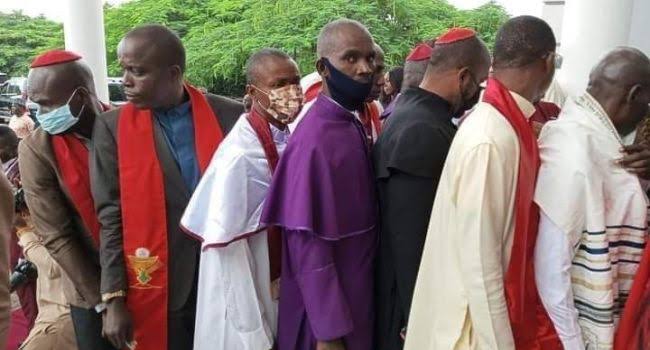 The alleged ‘fake’ Christian clerics who attended the recent unveiling of the Vice Presidential Candidate the All Progressives Congress (APC), Kashim Shettima, on Monday, presented proof of their ministries and ordination certificates.
Addressing a press conference on Monday in Abuja, they dismissed insinuations that they were sponsored by the APC Presidential candidate, Bola Tinubu.
Their presence at the event was greeted by public outcry after their photos and videos went viral on the social media, with some people describing them as either mechanics or yam sellers.
The outrage that trailed their controversial appearance forced the Christians Association of Nigeria and Arewa Christians (CAN)
to dissociate itself from the pastors and bishops.
At the press conference, the clergymen presented certificates and documents that they described as proofs of their ordinations and churches, maintaining that
they were no mechanics, yam sellers, or fake preachers as being portrayed on social media.
They identified their churches as: Christian Revival Evangelical Mission Worldwide, owned by Apostle Godwin Livinus, Divine Prophetic End Time Gospel Faith in Kubwa, a shepherd by Bishop Dr. Emeka Theodore, and the Light House of all Nation Ministry, which has Bishop Emmanuel Sunday Jayeola as General Overseer among others.
The Christian leaders who gathered at the venue under the aegis of the Muslim-Christian Love Foundation stated they were at Shettima’s presentation to show solidarity.
Secretary of the group, Adams Abel King, who read the statement on behalf of others, disclosed that it was unfortunate that they were portrayed as emissaries of CAN.
They dismissed claims of being sponsored to impersonate leaders of the Christian Association of Nigeria at the event.
The clerics condemned “the harassment and near-assault they endured over their participation at the event, particularly on social media where mob antics, driven by ignorance and malice, have strained social ties and caused divisiveness.”