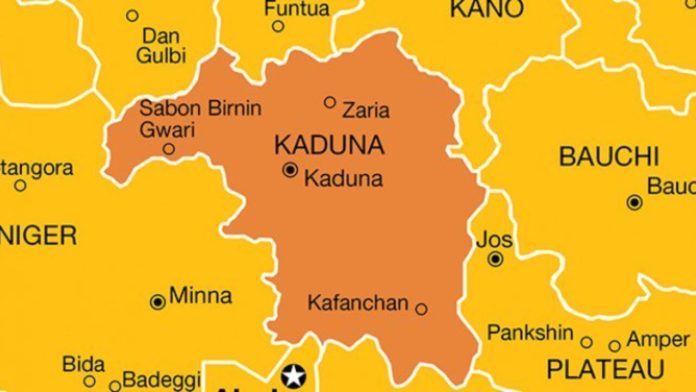 The Kaduna state police commissioner Mr. Yekini Ayoku, has said that the viral video purported to be terrorists arrested in Kakuka community, Chikun Local Government Area of Kaduna state on Sunday were not terrorists.
The clarification was made on Monday in Kaduna during a peace meeting between the leadership of Gbagyi and ethnic nationality and Fulani community in Kakura.
Speaking at the meeting which held at the Ministry of Internal Security and Home Affairs, the Ayoku said, investigations had revealed that the people seen in the video were members of the herders’ settlements in Kakura but were mistaken for bandits by the vigilante members who were going to apprehended bandits that attacked the community.
The police commissioner said , both the Gbagyi and Fulani groups in the community were victims of the bandits’ attack.
He said the bandits also killed a brother to the Gbagyi community leader and as well as rustled cattle belonging to the fulani community.
Ayoku said the terrorists had finished their operations and had escaped before the vigilante group who were going in search of the criminals, clashed with the innocent fulani who were also going about in the bush in search of their rustled cattle.
He said the vigilante had mistaken the fulanis as terrorists when they met them in the bush hence their arrest.
According to the police commissioner, “When we saw the video, we swung into action and called for an emergency meeting between the Gbagyi and Fulani communities of Kakura.
“From our investigations, we discovered what happened was that bandits attacked Kakura community and killed the younger brother of the village leader, Isiaku Karfe.
“The same bandits attacked a nearby Fulani settlement and within the same area, rustled their cattle.
“So, the vigilante of the Kakura community where the village head brother was killed, went in search of the bandits that attacked them, while the Fulani also went in search of their rustled cattle.
“While in the forest, the two sides clashed. In the process, three of the Fulani were killed and a number of others were injured.
“The information got to the military detachment in the area and they went for rescue and they took the dead and the injured to the hospital. “Presently, the injured are now being treated at 44 Nigerian Army Reference Hospital.
“So, these people taken to the hospital are not bandits, but rather, from the narrations of both sides, it was discovered that it was a case of mistaken identity.
“So, what we have done here is to bring the two communities together, then the Local Government Chairman, House Assembly member, the District Head and Head of the Fulani community have been asked to go back and ensure peace among the communities”.
Stephen Ibrahim, the District Head of Kujama, and Ardo of the fulani community in Chi LGA corroborated the commissioner’s clarification and assured that they will go back and work for peace in the community.
The meeting was attended by Samuel Aruwan, the Commissioner for Internal Security and Home Affairs, Samuel Aruwan, Salasi Musa, Chairman Chikun LGA,
Lt. Col. D.O Igwilo, Commanding Officer 312 Artillery Regiment, among other stakeholders from both the Gbagyi and Fulani groups.