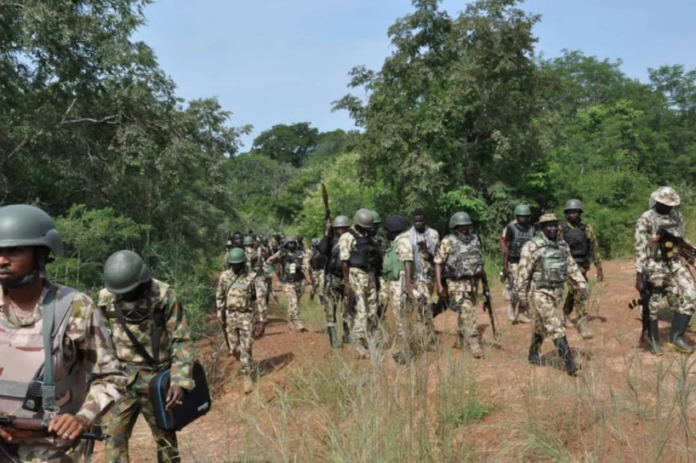 Troops of Operation Safe Haven have rescued 15 commuters abducted by bandits in Jagindi, Jema’a Local Government Area of Kaduna state.
The commissioner for Internal Security and Home Affairs, Samuel Aruwan, disclosed this in a statement on Monday in Kaduna. Aruwan said the 15 persons were kidnapped from two vehicles in the area while on transit, adding that search and rescue operations were being sustained by troops in the area.
He said the incident was reported to the state government by Troops of the Operation Safe Heaven.
The statement said, “Troops of Operation Safe Haven have reported to the Kaduna State Government the rescue of 15 commuters in Jagindi, Jema’a LGA.
“According to the report, the 15 persons had been kidnapped from two vehicles in the area while in transit.
“The troops responded to a distress call and mobilized swiftly to the location. They repelled the bandits, enabling the rescue of the abducted persons”.
The statement listed those rescued as Maisaje Pam, Samuel Peter, Ziyau Abdul
Henry Dabo, Abduljabar Auwal, Muhammad Ali, Dama Dabo and Ramatu Aminu.
Others, according to the statement, include, Muhammad Sani, Abdullahi Muhammad, Bashar Garba, Abubakar Musa Saad Yakubu, Maryam Ibrahim and Lami Bitrus.
Aruwan said, the “Acting Governor Dr. Hadiza Balarabe, noted the report with satisfaction and thanked the troops for their swift response which resulted in the rescue of the commuters.
“The troops are sustaining search and rescue operations in the area”.