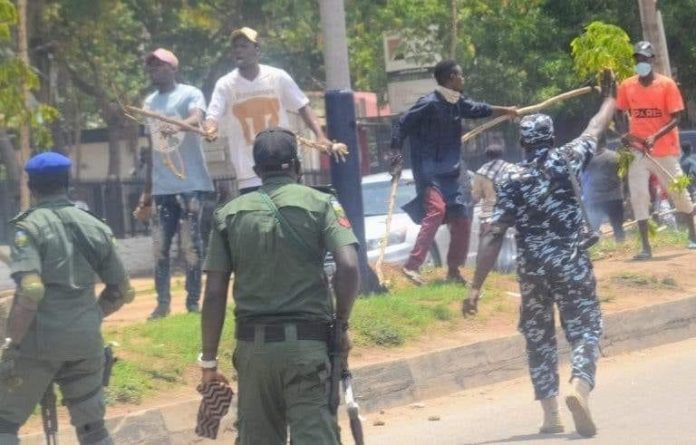 Armed thugs, alleged to have to been sponsored, attacked protesting workers led by the President of the Nigerian Labour Congress (NLC), Dr. Ayuba Wabba in Kaduna on Tuesday.
The workers were attacked at the NEPA Roundabout, Kaduna, during their peaceful procession in continuation with their five -day warning strike against the mass sacking of workers by the Kaduna state government. The hoodlums, armed with sticks and knives arrived in two vehicles and Keke NAPEP, throwing stones at the protesters.
There was pandemonium as the police who have been accompanying the protesting workers to their processions swiftly responded by firing teargas at the hoodlums.
The workers also joined the police in repelling the thugs one of who was caught and beaten mercilessly.
The workers carried on with their procession back to the state secretariat of the NLC after the disruption.
Speaking in an interview, the NLC President condemned the attacked, alleging that the thugs were sponsored by Governor Nasir El-Rufai.
Wabba said: “Today is a sad day in the history of democracy in Nigeria.
“Early in the morning today, we got credible information that Governor El-Rufai had hired one Alhaji Hassan Gwaska who lives in Hayin Banki.
“He was a car dealer hired some thugs to come and attack us.
“I called the DSS (Department of State Services), I called the DIG (Deputy Inspector General) Operations, I also called the Director of SSS (State Security Services) and gave them the information.
While we are here, they (thugs) came, but we thank God, we dismantled them. We have chased them away because we have the number.
We are not thugs and we are not using thugs, we are using Nigerian workers”.
Meanwhile, the Progressives Governor’s Forum (PGF) has appealed to both the NLC and the Kaduna state government to find amicable way of resolving the problem.
A statement on Tuesday by the Chairman of the forum and governor of Kebbi state, Alhaji Abubakar Bagudu, noted the challenges facing the states, especially given dwindling revenue, and appealed to all patriotic Nigerians, including the NLC, to demonstrate more commitment toward engaging governments at all levels to address problems.
Bagudu said, “This is not the time for muscle flexing, Nigerians are already overstretched with many challenges.
“At this critical point of our democratic journey, there cannot be limits to engagement between all governments and citizens. “Every step must be therefore taken to resolve the current faceup between Kaduna State Government and NLC”.
The statement appealed to both the State Government and NLC to return to the negotiating table.
“In particular, we want to appeal to the NLC leadership to recognise that the burden of leadership at this point is more about responding to challenges based on the honest disposition of correcting past mistakes.
“As Progressive Governors, we share the vision of Kaduna State Government of reforming all our Local Governments to make them more efficient and consequently the pivot of critical development initiatives. “At the same time, we want to appeal to Kaduna State Government under the leadership of our colleague, Mallam Nasir El-Rufai to take all the necessary step to ensure the resolution all disagreements in the larger interest of citizens in Kaduna State.
“We are confident that both Kaduna State Government and NLC will resolve all outstanding issues and restore industrial harmony in Kaduna State”, the statement said.