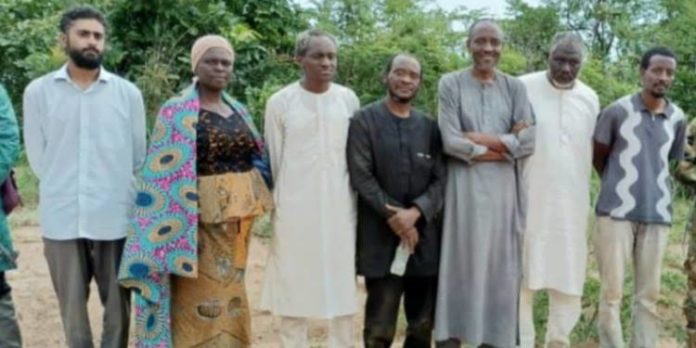 Seven of the 50 remaining abducted victims of the March 28 Abuja- Kaduna passenger train have been freed after 102 days in captivity.
According to reports by the Kaduna based Desert Herald newspaper, the seven victims, including the son of Prof. Ango Abdullahi, Chairman of Northern Elders Forum (NEF), were released on Saturday following negotiations by Tukur Mamu, a media consultant to Islamic cleric, Sheikh Ahmad Gumi.
Mamu is also the publisher of Desert Herald.
The terrorists had on June 11, released 11 of their victims following negotiations by Mamu.
The report listed those released as Bosede Olurotimi, Abubakar Zubairu, Alhassan Sule and Sadiq Ango Abdullahi.
Others, according to the report include, Muhammad Daiyabu Paki, Aliyu Usman and a foreign national of Pakistani origin, Dr. Muhammad Abuzar Afzal.
According to the report, those released were handed over to the military to be reunited with their families.
The report also quoted Mamu, saying that no ransom was paid for the release of the seven victims.
Mamu was further quoted, saying that the release of seven of the victims has vindicated Sheikh Gumi on the power of mediation.
“I want to assure the nation that everything that was achieved today was singlehandedly initiated and arranged by me with the full support and prayers of my principal, Sheikh Gumi.
“That is why I keep emphasising that government has the power to end the agony of these innocent victims in one day.
“This is just one individual that sacrifice his life and even integrity.
“There is no military solution to the current security debacle in Nigeria. When you sincerely engage them, these guys even though wicked with misguided religious beliefs, they are listening.
“I have sufficient evidence to prove that they do listen. It is this power of engagement and sincerity that resulted to the release of this seven victims”, Mamu said.
Abdulfatai Jimoh, coordinator of families of the abducted passengers of the Abuja- Kaduna train attack confirmed the release of the seven victims.
“Yes, it is true seven people have been released. I just spoke with the family of one of those released”, Jimoh said when contacted on telephone.