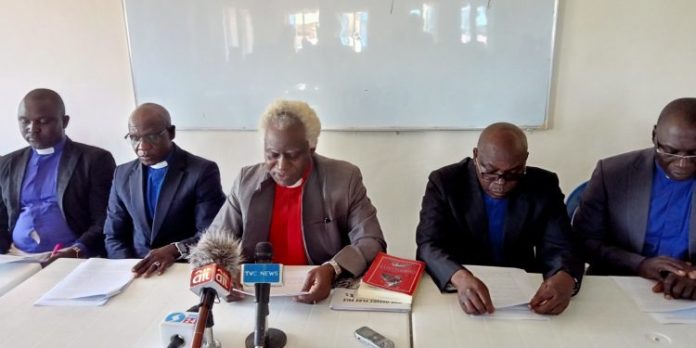 The Tareyar Eklisiya a Nigeria (TEKAN) and the Evangelical Church Winning All (ECWA), a bloc of the Christian Association of Nigeria (CAN) has said that 85 people were killed while 55 others were injured during the recent attack on communities in Bassa Local Government Area of Plateau state.
Addressing a news conference on Monday in Jos, Rev. Moses Ebuga, called for the removal of the General Officer Commanding (GOC) 3rd Division, Nigerian Army, Maj. Gen. Ibrahim Ali, who also double as the Commander, Operation Safe Haven, for allegedly taken side with the attackers and lack of confidence.
The Christian group also alleged that whenever there is a government directives to search houses for weapons, only the homes of the natives were searched while the Fulani herdsmen go about freely with their sophisticated weapons which they used in attacking communities.
According to him, the natives were often harassed and dispossessed of even common kitchen utensils in the name of a search for weapons.
This, according to Ebuga, has emboldened the criminals to invade communities and unleash terror on people.
He said the GOC has not lived to expectation, stressing that the headquarters of the 3rd Armoured Division is located in communities attacked by the fulani herdsmen yet, the attacks lasted for long hours and days without any response and protection from the army.
Ebuga said, “Recently, the Irigwe Irigwe land in Bassa LGA of Plateau State has been in the news, over killings and destructions by Fulani herdsmen in the land.
“We would like to use this medium to give a report of what has happened as observed and recorded by the Church.
“From July 30th to August 17, 2021, over 85 persons were killed, 55 hospitalised, 3,141 houses burnt and about 2901 farms destroyed”.
According to him, 5901 families were displaced and more than 26 villages destroyed.
Ebuga said further that, “Christians, especially our bloc on the Plateau, cannot remain silent while its members and properties are destroyed by the killer Fulani herders and militias, with no or less efforts by the government to stop these evil acts.”
He expressed dismay how some prominent Islamic scholars declared their intention to attack Christians on the Plateau in retaliation of the unfortunate incident that led to the killings of some commuters by hoodlums along Rukuba road, Jos North Local Government Area
“The GOC of the 3rd Division of the Nigerian Army who doubles as the Commander Operation Safe Haven in the person of Major General Ibrahim Ali has not lived to expectation.
“The military barracks being and situate in the self same Bassa LGA and within a few kilometres radius lie under attacks for long hours and days without any response and protection from the Army this leaves much to be desired any reasonable and security presence by their promixity and neighbourliness.
“As a result of these spade of insecurity, we have lost confidence in his ability to handle to security situation in Plateau State and therefore call on the Nigerian Army headquarters to relieve him of these responsibilities forthwith and strongly advice that no one officer should again be made to hold these dual responsibilities”, Ebuga said.
The churches also called on the federal government and all security agencies to as matter of urgency to be responsible to their duties as the security and protection of lives and properties are the primary responsibility of every government.
“We are calling on the security agents in the state to be sincere and non-partisan in the pursuit of their responsibilities, as it seems to favor a selective few or particular group, we decry selective justice and imposition of grave injustice on the peace-loving community dwellers in Plateau State and such still remains highly unacceptable,” he said .