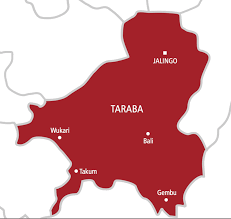 The Ichen community of Bissaula in Kurmi Local Government Area of Taraba State has called on the state Governor, Darius Ishaku, to urgently ensure deployment of soldiers to the community to curb the incessant attacks and killings in the area.
Bissaula, the traditional headquarters of Ichen people had been under constant attack by bandits since December 17, 2021. Scores of people, including three mobile police officers deployed to provide security in the area were killed during an attack on March 16, 2022.
At a news conference in Jalingo at the weekend on behalf of the Ichen community, Elder Ebi Bako enjoined the governor to as a matter of urgency, facilitate the permanent deployment of soldiers to the community to quell the killings.
He said, “The Ichen community of Bissaula is appealing to the state governor to as a matter of urgent importance, ensure the deployment of military personnel to be stationed permanently in Bissaula to enforce peace between the Ichen and Ndaka people.”
Bako said, the community came under fresh attack on August 14 just a day after ammunition being conveyed to the militia group perpetrating the attacks was intercepted at Didan, a community within the Local Government area.
He said although, the ammunition was handled over to the Divisional Police Officer (DPO) of Kurmi, he however called for a thorough investigation into the matter particularly the Chairman of the Vigilance Group in Kurmi, Mr. Emmanuel Zachariah, who, according to him, claimed ownership of the ammunition.
As a recipe to permanent peace in the community, Bako appealed for the submission of the report of the Commission of Inquiry set up by the state government to unravel the issues around the Ichen/Ndaka crisis.
The Ichen community maintained that the timely submission of the report would enable the government to act on their recommendations to end the killings.
“We want to thank Governor Darius Ishaku for setting up a Commission of Inquiry to address the root causes of the conflict and find a lasting solution.
“As a peace-loving and law-abiding people, the people of Ichen community of Bissaula are appealing to the Commission of Inquiry to submit its report on time so that lasting peace will return to the Bissaula community.
“Government should also ensure that the perpetrators and their accomplices are apprehended and dealt with in accordance with the laws of the land,” he said.