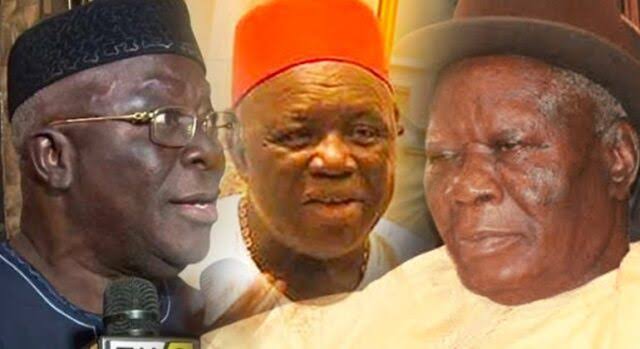 The Southern and Middle Belt Leaders Forum (SMBLF) has said that it will soon recommend a presidential candidate to Nigerians for the 2023 elections.
In a communique issued on Monday after its meeting at the weekend in Abuja, the group said the appropriate person will be recommended to the people engagements with the various presidential candidates.
The communique was signed by Chief Edwin Clark, SMBLF/PANDEF leader; Ayo Adebanjo, leader of Afenifere; Pogu Bitrus, president-general, Middle Belt Forum and Okey Emuchay, secretary-general, Ohaneze Ndigbo Worldwide.
The group commended the All Progressives Congress (APC), African Action Congress (AAC), African Democratic Congress (ADC), All Progressives Grand Alliance (APGA), and Labour Party (LP) for fielding candidates from the south.
The forum chided the Peoples Democratic Party (PDP), Action Alliance (AA), Action Democratic Party (ADP), Allied Peoples Movement (APM), New Nigeria Peoples Party (NNPP), Young Progressives Party (YPP), for nominating presidential candidates from the north.
The group reiterated its stance on the principle of zoning and power rotation between the North and the South, as the fulcrum on which the Nigerian federation stand since independence.
The communique said, SMBLF, “will in due course, engage with the appropriate Presidential candidates and afterwards decide on which of the candidates to recommend to the peoples of Southern Nigeria, the Middle Belt region and indeed, all Nigerians of goodwill, for consideration at the polls in 2023”.
The forum also lamented the failure of the federal government to live up to its constitutional responsibility of protecting lives and properties, not that it is an invitation for Nigerians to take up arms and defend themselves.
“That the state of insecurity in the country is worsening by the day, with devastating impacts on the welfare and livelihood of ordinary Nigerians, thus, calls on the federal government to take urgent steps to stem the tide and assuage the suffering of Nigerians.
The communique “warns that the ambiguity of the federal government and the failure of the security agencies to decisively deal with these situations, buttress concerns that officials of the Federal Government and security agents are complicit in the security anomalies in the country”.
According to SMBLF, “the continuous abdication of the government’s primary and abiding constitutional responsibility of safeguarding the lives and properties of its citizens, is an irresistible signal to Nigerians to exercise their inalienable rights of self-defence, by all means, in deviance of extant laws, which have not deterred terrorists the use of weapons even superior to those of the security agencies.”
The communique maintained that “the security situation in the country calls for the implementation of state police, and that the national assembly and the federal government should immediately begin the “requisite legislative instrument in this regard rather than indulging in meaningless lamentations”.