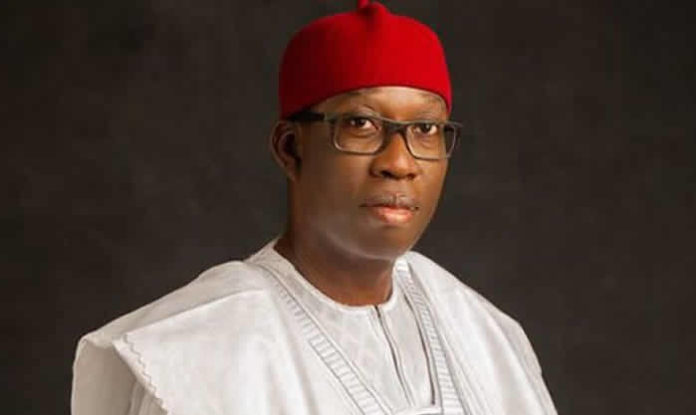 The Southern and Middle Belt Leaders’ Forum (SMBLF), have rejected reject the nomination of the Delta state governor, Ifeanyi Okowa as Vice Presidential candidate of the Peoples Democratic Party (PDP).
In a statement on Friday, SMBLF described Okowa’s acceptance of the nomination as “a betrayal of the highest order.”
The group also alleged that the governor spent “an extensive sum of money to lobby for the position”, despite warnings to southern political stakeholders not to accept nominations as Vice-Presidential candidates if the presidency is not zoned to the south.
Presidential candidate of the party, Abubakar Atiku, had on Thursday announced Okowa as his running mate in the 2023 elections.
However, SMBLF in a statement on Friday in Abuja, said Okowa’s action as unfortunate.
The statement was jointly signed by Elder statesman and SMBLF leader, Edwin Clark, Afenifere leader, Ayo Adebanjo, President-General of the Middle Belt Forum, Dr. Bitrus, and the President-General of the Ohanaeze Ndigbo Worldwide, Chief George Obiozor.
The statement said, “It is essential to underline that the Southern and Middle Belt Leaders’ Forum (SMBLF), applauded the meeting of the governors, given its significant representation and the gravity of the outcome; we followed up and issued a similar statement after our meeting in Abuja on the 30th of May 2021, asking that the presidency should rotate to the south.
“And went further, on several other occasions, to caution political stakeholders from the South, including serving and former governors, ministers, senators, etcetera, not to, on any account, allow themselves to be appointed or nominated as running mate to any presidential candidate, if the presidency is not zoned to the south and that we will work against such person or persons.
“It is, therefore, most unfortunate that the Governor of Delta State, Senator Ifeanyi Okowa who should know better, accepted his appointment as running mate to Alhaji Atiku Abubakar.”
The statement said SMBLF
has nothing personal against the governor, stating however that his acceptance of the Vice-Presidential slot may be bad luck for the political future of the people of southern Nigeria.
The group alleged that Okowa spent “an extensive sum of money to lobby for the position”.
The group said, “It is difficult to fathom how a political party can claim to be on a supposed rescue mission with such false footings of unfairness, injustice, duplicity and gross insensitivity to national outlook.”
The statement said Okowa’s action is a betrayal of the trust reposed on him by his fellow southern governors.
“We, therefore, reject Governor Ifeanyi Okowa and his vice presidency, and leave him to his lot, but let the world know that this is a betrayal of the highest order.
“And that this is not a matter of loyalty to one’s political party, but rather a greedy, parochial and unpatriotic action, committed against the general interest of his State, Delta state, the Niger Delta region, and Southern Nigeria. It is, certainly, also not in the interest of the nation at large.”