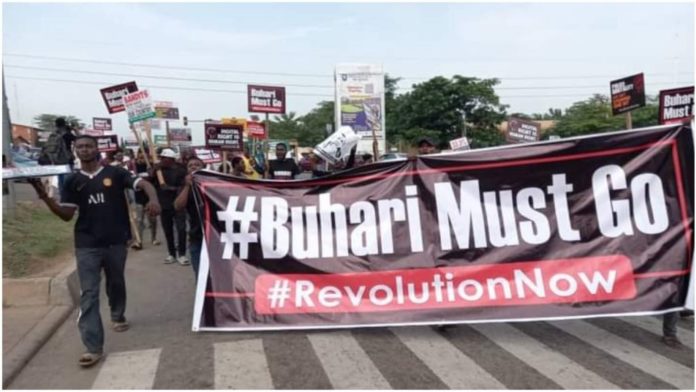 Members of the Islamic Movement in Nigeria (IMN) also known as Shi’ites on Saturday joined June 12 protesters in Abuja to demand the resignation of President Muhammadu Buhari, according to reports by TheCable.
TheCable reports that the stormed major roads in Abuja metropolis to kick against “bad governance” under the Buhari administration, as the country marks Democracy Day.
They chanted songs and held placards with inscriptions such as, ‘Buhari must go’, ‘Police brutality has not stopped’, ‘Digital right is a human right’.
The Shi’ites have been protesting against the continued detention of their leader Sheikh Ibrahim El-Zakzaky since December, 2015.
According to the report, the protesters were chanting: “Buhari must go”, free El-Zakzaky”, “stop injustice,” the protesters chanted as they marched along the streets.
There are fears that the protest could turn violent considering how the police responded to similar demonstrations in the past.
The police had earlier fired teargas at some Democracy Day protesters in Abuja after they (the protesters) resisted attempts to disperse them.