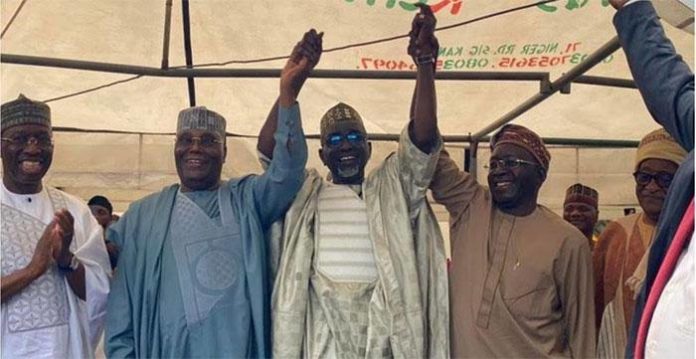 The Peoples Democratic Party, on Monday, received a former governor of Kano State, Senator Ibrahim Shekarau, back to its fold.
Shekarau dumped the New Nigeria Peoples Party (NNPP), three months after joining the party, citing “betrayal of trust”.
He had earlier partted ways in May 2022, with the Kano State Governor, Abdullahi Ganduje of the All Progressives Congress (APC) before joining the NNPP with thousands of his supporters.
In 2014, Shekarau, who was one of the founding fathers of the APC, dumped the party for the PDP in protest against what he described as handing over of the party structure in Kano State to Kwankwaso, the then governor of the state.
However, in the build-up to the 2019 general election, Shekarau dumped the PDP and returned to the APC in 2018 following the dissolution of the State Executive Committee of the PDP and the setting up of a caretaker committee by the party (PDP).
Speaking during the reception, Shekarau said, “All the agreements we had with him were betrayed by Kwankwaso and his boys and they did not accommodate one single person from my camp.
“We reached an agreement to accommodate my supporters into various elective positions in the party, but until now, the committee set up could not accommodate one single person apart from the senatorial slot given to me.”
Shekarau said, “I will never be a party to injustice. My integrity is utmost and not any political position that will make me compromise it and that of my people. Nobody will use position or money against my integrity.
“I am a man of honour and integrity but his governorship candidate (Abba Yusuf) who was given the responsibility to look at areas to accommodate my people into various elective positions never for one single day do so or even call for meeting let alone accepting my supporters to contest.
“Nobody will use money to change my conscience. I was a governor for eight years in Kano and people believed in my integrity.I
“I am still living in a rented house in Abuja and never allocated a single plot of land to myself when I served as Governor in Kano and I challenge anyone who knows my plot of land to expose it.”
Welcoming Shekarau to the party, the national chairman of the PDP, Iyorchia Ayu, said the party would not be distracted by peddlers of lies.
“We are going to win Kano and we are going to win everywhere,” Ayu said.
He said, “There are so many outside there that you can’t see within this arena. And I believe that God willing we shall overcome all distracting forces, we shall work hard a if our lives depend on it… and I want to tell you all that we are going to overcome whatever difficulties we may have.”
He said, “Our party is getting more united, and w thank the effort of our leader, Alhaji Atiku Abubakar, who has done everything possible to bring every member on board”.