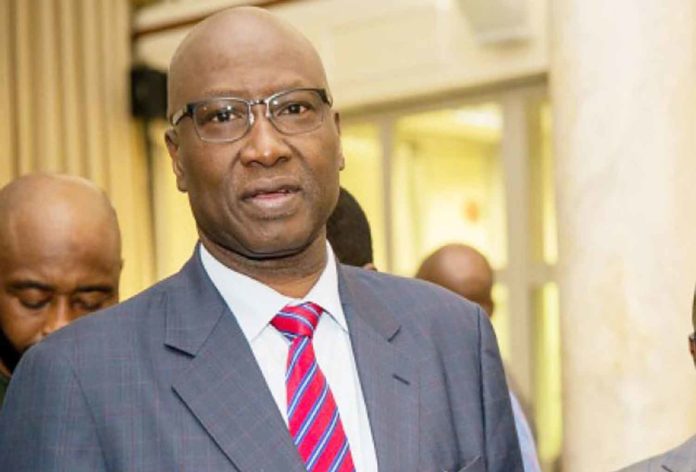 The Secretary to Government of the Federation (SGF), Boss Mustapha, has said that “the security situation has relatively improved across all parts of the country.”
He also said the insurgents terrorising the north east have been decimated considerably adding that over 30,000 of the insurgents and their family had so far surrendered.
In a keynote address at a “Stakeholders Engagement in the current security situation in the North West which held on Thursday in Kaduna, Mustapha said, the threats of the separatists in the South East and parts of South South geo-political zones have reduced in traction, adding that in the maritime domain, “our waters are now calm and we no longer receive reports of daily attacks by priates.”
According to the SGF, “Troops of Operation SHARAN DAJI, in conjunction with personnel of the Nigeria Police Force and other intelligence/security and para-Military agencies, have sustained onslaught against the criminal elements.
He said the federal government is concerned with these challenges and has been working assiduously to reduce them to the barest minimum.
According to him, the federal government had taken far reaching measures to address the security challenges.
He said, “Some of the measures include; increase in budgetary allocation as well as shoring up the equipment holding of the military and other security agencies.
“Similarly, approval was granted for the recruitment of 10,000, police personnel for three consecutive years while their salaries have been upwardly reviewed to boost their morale, enhance productivity and elicit hard work,” he said.
The SGF said the workshop was part of the non-kinetic approaches to sensitise communities on the need to collaborate with government at all levels in order to tackle the menace of armed banditry and other related crimes in the North West geo-political zone.
“With the recent dimensions of security challenges including, human/child trafficking, baby factory syndrome, ritual killings and the like, the sanctity of the human life has been called to question.
“The perpetrators of the evil acts live among us and are our relatives. This highlights the need for the cooperation of the communities and the whole-of-society approach to tackle insecurity”.
Also in his remarks at the occasion, the Kaduna state commissioner for Internal Security and Home Affairs, Samuel Aruwan, said Nigeria was witnessing several significant challenges, especially insecurity.
He said, “The current security threats confronting the Northwest states, particularly banditry and terrorism, have become increasingly irregular.
“They require significant levels of collaboration between and across layers of government, as well as distinct groups.
“In clear recognition of this fact, this forum has been set up to stimulate productive engagement between relevant groups across the region.
“It is believed that such an engagement will avail profound insight to all stakeholders and position them to effectively negate the existing challenges at community and group levels”.
Aruwan said, the Kaduna state government has been complementing the efforts of the armed forces, the police and other national security outfits through logistics support, mobility, hardware and other means.
He said improving internal security cannot be left to government alone as insecurity impacts the local populace directly, adding that citizens must be incorporated in efforts to address the problem.