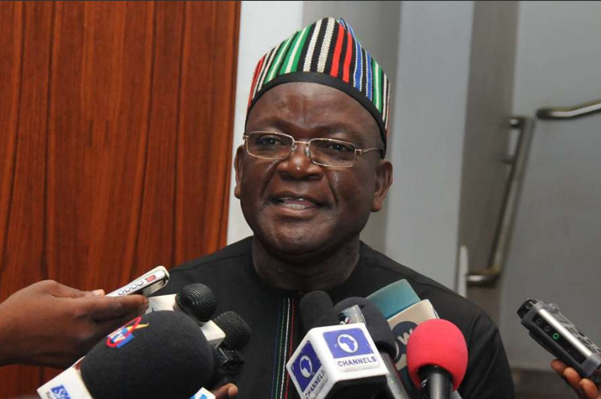 Benue State governor, Mr. Samuel Ortom was, on Saturday, prevented by security agents from gaining entrance to the Tactical Command of the Air force Base in Makurdi to receive Vice President Yemi Osinbajo, who was transiting from the airport to Taraba State for an engagement.
Ortom who condemned the action of the airport security, said he got a letter from the presidency intimating him of the vice president’s transit through the Air Force Base Makurdi on Friday and went to welcome him in line with state protocol but was stopped by the security operatives.
It is not clear if the vice president was aware of the governor’s visit to the base to receive him.
At a briefing with journalists, Ortom said the presidency had taken politics too far.
He described the action by the security personnel as unacceptable and a breach of protocol.
He expressed regrets that he had set out to attend the burial of Professor Ignatius Ayua but had to delegate his deputy in order to receive the Vice President.
The letter addressed to the Governor from the State House Abuja was dated 10th February, 2022 with reference number VP/SP/DOP/26 and titled: “Visit of His Excellency, Professor Yemi Osinbajo, SAN, GCON, Vice President, Federal Republic of Nigeria to Wukari, Taraba State transiting NAF Base, Makurdi, on Saturday, 12th February, 2022”.
The letter which was signed by Ambassador Abdullahi Gwary said the vice president would return through the same route in the afternoon.
Ortom said “Unfortunately, on getting to the main gate of the airforce, security personnel at the entrance said the governor’s convoy wont be allowed in because according to them, they were not informed about the governor’s visit to the base to receive the vice president”.
The governor wondered why he should be treated like that by the airforce personnel in the state where he is the Chief Security Officer.
He vowed to report the matter to the Vice President for necessary action, stressing that there should be a clear difference between politics and governance.
He accused the presidency of treating him unfairly because of his criticisms which he said were constructive criticisms to help the president in his task to govern the country on the right part.