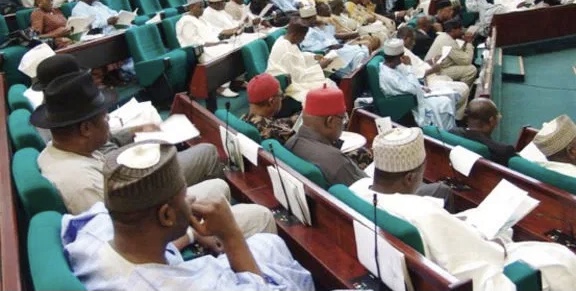 The House of Representatives has called  for the deployment of more troops to Lissam and Takum Local Government Areas of Taraba state, to dislodge the terrorists unleashing mayhem on communities in the area.
The house also urged intelligence and operational security agencies to identify the routes and camps of the terrorists and their local collaborators and bring them to book.
These were part of the resolutions of the House on Wednesday, following a motion on “Matter of Urgent Public Importance” by Hon. Rimamnde Shawulu Kwewum, representing Takum/Donga/Ussa/Yangtu Federal Constituency of Taraba state.
The House also called on the National Emergency Management Agency (NEMA) and public spirited organisations to intervene in providing relief materials to the over 20,000 displaced persons who are now refugees in their communities.
The lawmakers further mandated the House committees on Defence, National Intelligence and Human Rights to interface with the Armed Forces and ensure compliance and report back to the House within 14 days for further legislative action.
In the motion tagged, “Urgent need to prevent terrorists from over running Ussa Local Government Area of Taraba state”, Kwewum decried the deadly activities of terrorists in his constituency, noting that unless urgent action is taken, the criminals will overrun communities in the area.
He said even security personnel had not been spared by the criminals, as six soldiers of the 93BN of the Nigerian army were recently murdered in Takum while communities were being invaded sacked unabatedly.
According to Kwewum, on the 5th to 12th July 2022, over 30 people were killed by the terrorists.
The Reformed Church of Christ in Nigeria (RCCN), Taraba state, had also in a recent letter to the Taraba state governor, Darius Ishaku, raised similar concern about the deplorable security situation in the state.
He noted that “since the avoidable killings and destruction began on April 17, 2022, many communities have been attacked and are still vulnerable to further attacks.”
He said, “In Takum Local Government Area, the affected communities include, Basank, Muji 1, Muji 2, Fawen, Tati, Flashin, Rikwen Tumu, Rikwen cwun, Tswen 1, Tswen 2, Kando, Kasiten, Kpashi, Shimta, Kwaben, Mbiya, Kakum, Tukok, Gaba, and Mbafobani among others
“In Ussa Local Government Area, the communities that come under attacks include,  Asik, Konkaen, Fangtae, Kujwaen, Kicha, Kusansang, Rikwentwen, Rikwen tsinya, Rikwen Makun, Tutuwa, Kampo, Ripaenchin while in Yangtu Special Development Area, the communities include
Kwari, Boi, Kpaw, Nyifiye, Ruwa, Nyicwu and Ribasi.
Kewum told the house that, “in the latest attacks, the terrorists waylaid innocent and defenceless people and they freely moved from Takum to Ussa, shooting at motorists and pedestrians.
“The killings and destruction, have become daily occurrences – and in several of the communities the terrorist attack, crops in the field are destroyed; Houses including worship centres are sometimes set them ablaze”, he said.
He further told the house that the terrorist invade the areas in large numbers simultaneously attacking several villages and settlements.”
He noted that of the terrorists have been flooding different parts of country insidiously, setting up bases for further attacks on other unsuspecting communities.
Kwewum lamented that “the attacks kept occurring without any strong, coordinated and consistent intervention from the security agencies – especially since the soldiers were killed by the bandits and the commanding officer of the 93BN abducted”.
He said, “several appeals by the communities and patriotic resolutions of the house for a stronger intervention by both the state and federal government have gone largely unheeded”.
The lawmaker further lamented that “agricultural activities have virtually been disrupted in the area which produces a significant percentage of the foods needs of Nigeria”.
He said, “given the proximity of the area to the Ambazonia and Cameron conflict, the bandits will in no distance future internationalise the crisis as well as link easily and collaborate with Boko Haram cells across the Nigerian border”.
He said there was “urgent need to deploy more security agents to the Local Governments to dislodge the terrorists and bring normalcy to the area as the citizens are becoming despondent and losing confidence in the government.”