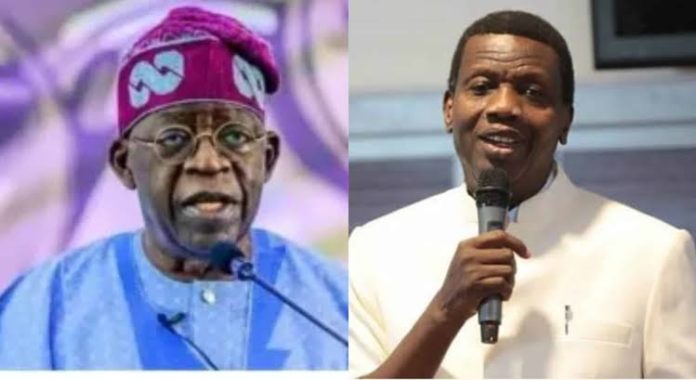 The Redeemed Christian Church of God (RCCG) has dismissed reports that its General Overseer, Pastor Enoch Adeboye, met with Bola Tinubu, the Presidential candidate of the ruling All Progressives Congress (APC).
There were reports that Adeboye is not opposed to the APC’s Muslim-Muslim ticket and that he is in support of the presidential bid of the former Lagos governor.
The report alleged that Adeboye met with Tinubu on Sunday at the Redemption camp over the controversy trailing his Muslim-Muslim presidential ticket.
The report had quoted a source in the Tinubu Campaign team, who pleaded anonymity, saying that the meeting was to make the Christian community see reasons behind the Muslim-Muslim ticket.
The report further claimed that Tinubu’s wife, Senator Oluremi, was at the meeting
The report added that Tinubu would soon meet with the leadership of CAN.
However, in a statement on Tuesday, the RCCG described the report as false, declaring that the church will not endorse the presidential ambition of any candidate for the 2023 general election.
The statement urged Nigerians to disregard the report, threatening that legal action will be taken against any news outlet that publishes such false news in the future.
The statement said, “It has come to our notice that some news outlets are reporting that a meeting Between Pastor E.A. Adeboye, the General Overseer of the Redeemed Christian Church of God Worldwide and the former Governor of Lagos State Mr Bola Ahmed Tinubu was held a few days back at the Redemption camp where our esteemed father in the Lord was said to have supported the preferred candidature of the party the former governor is a member of.
“This is to inform the general public that Pastor E.A. Adeboye is under the authority of God, the Christian Association of Nigeria (CAN) and the Pentecostal Fellowship of Nigeria (PFN), and as such will not speak on behalf of Christians on issues regarding policies.
“Pastor E.A. Adeboye and the RCCG have not and will not endorse any candidate for the 2023 General elections in Nigeria.”