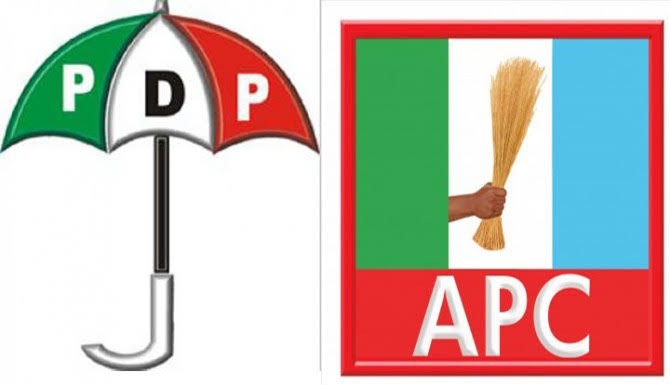 There are civil wars raging in Nigeria  at the moment. No. Sunday Igboho and Nnamdi Kanu have not yet gotten enough logistics to start their secessionist wars – hopefully such ugly scenarios will not play out in our country again.

The civil wars are taking place in the political arena. The All Progressive Congress APC, which is the ruling party and the People’s Democratic Party PDP, the major opposition party, are at wars. Not against each other, which would naturally qualify as a normal inter party squabbles, intended to gauge their popularity and acceptance amongst the voting populace. These wars are within. Intra parties rumbles that have nothing to do with the public, solely intended to see who amongst the warring factions, will at the end of the day, acquire the souls of the parties. And from the ferocity of the fights, it’s becoming brutal, the end of which will not be palatable to either of the two parties. This therefore is the most auspicious time for those clamouring for real change in the archaic political architecture of the country, who pride themselves as the Third Force, to hit the iron while it’s still very hot. They may never get a better opportunity.

Look at PDP for instance. Its rancour first started simply as a blip, or if you stretch it, as an embarrassment, when the governor of Ebonyi State, David Umahi, decamped to APC in November 2020. The embarrassment turned into concern, when Umahi was followed, seven months later, last June by his Cross River State counterpart, Ben Ayade. The concern now became a crisis when just a little over one month after Ayade left for APC, the governor of Zamfara State, Bello Matawalle, also suddenly became a ‘Progressive’. Now, PDP members are not smiling again. The umbrella is being shred into pieces. The Chairman, Uche Secondus is receiving blows from left and right, with members openly calling for his resignations and even the governor of River State, Nyesom Wike, the home State of Secondus, calling him a liar at a public function. The crisis reached a boiling point last week, when seven (all deputies) out of the 23 members of the National Working Committee, NWC tendered their resignations letters. The seven could be joined by the National Youth Leader, Uche Okoye, who threatened to also resign if Secondus insisted in clinging on to power. The gale of defection continued last week, when a member of the party’s Board of Trustees, Senator Joy Emordi also decamped to APC. A hurriedly arranged meeting of the NEC (the highest organ of the party) late last week, could not stem the upheaval. A normally taciturn Secondus came out smoking, accusing a high ranking member of the party of wanting to hijack the machinery of the party by installing a caretaker committee, of which he vowed to resist. This is where we are at the moment. The National Convention of the party, which should produce the next set of NWC, is just four months away in December. Whether the umbrella can be sewn back for a formidable rainstorm in 2023, cannot be guaranteed. It’s not looking good for the so-called largest party in Africa.

The case of the ruling party, the APC, is even worse. The Supreme Court has declared the position of the caretaker Chairman of party, Mai Mala Bunu as in direct conflict with his position as Yobe State governor. The highest court in the land ruled that Bunu presiding over the affairs of the party and that of Yobe State pari passu, is a padipadi arrangement that is contrary to provisions in both the Nigerian constitution and that of even the party itself. But trust the aggrieved in the party. They saw a golden opportunity and grabbed it with both hands. They called on the party to halt its proposed congress elections scheduled for last weekend and solve this Bunu’s albatross first before anything. President Buhari, who is presently in London for medical check-up, mandated his deputy, Vice President, Yemi Osibajo, to analyze the Supreme Court’s ruling. Osibajo and all the five lawyers in the Federal Executive Council advised that the congress elections should be halted, while they study the Supreme Court ruling. All, except one. The Attorney General and Minister of Justice, Abubakar Malami, opined that, what the apex court ruled was something the party shouldn’t lose sleep over. And the congress elections went ahead. Now, Malami is virtually a godson of President Muhammadu Buhari, while Bunu became the party’s caretaker Chairman, solely at the behest of Buhari. Both Malami and Bunu were/are staunch members of Congress for Progressive Change CPC, Buhari’s party that went into alliance with Tinubu’s Action Congress of Nigeria ACN and Ogbonnaya Onu’s All Nigerian People’s Party ANPP, to form the APC. Even though, the three parties have successfully merged into one party, members still see themselves as representatives of each of the tripod that makes up the APC. Malami therefore saw the attempted stoppage of the congress elections as a slap on Bunu. An injury to one CPC is an injury to all CPC, so it seems. For Buhari to allow the congress elections to go ahead, despite the submission of his loyal and dutiful Vice President, clearly showed where the President will stand when push comes to shove, which actually is not far away.

But why the APC cannot see the clear danger ahead, is a misery that one cannot explain. Not after what transpired in the 2019 general elections, when this same Supreme Court first stopped the party from presenting candidates for any post in River State and later declared all the votes won by the party’s candidates in Zamfara State at all levels (except in the Presidential), as wasted, because of clear violations to the Nigerian constitution and that of APC, by the APC themselves. The party is taking the same road and is expecting a different outcome. Is that not madness?

But why should anybody, least of all, the Third Force, take panadol for the headaches of these two parties? If anything, they should rejoice and take full advantage of the situation This is the best chance to showcase to Nigerians that they are ready to take over the mantle of leadership in this country. Ordinarily, neither APC nor PDP could easily be dislodged from the stage, but with their determined resolves of savage, vicious and deadly civil wars, a golden opportunity presents itself to the Third Force. Seize it.