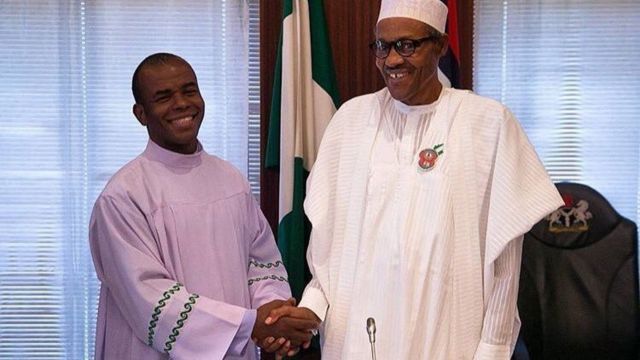 The Presidency has responded to calls by Father Ejike Mbaka, a Catholic priest for the impeachment of President Muhammadu Buhari, alleging that the clergy man is after the President for failing to influence government contract his friends.
Also, the ruling All Progressives Congress (APC), threatened to expose the Catholic Priest to the headquarters of the Roman Catholic Church and the Pope, if he continues to cause disaffection for the federal government with his utterances.
Mbaka is the Spiritual Director of Adoration Ministry, located in Enugu state and a diehard supporter of Buhari.
During the 2015 Presidential election, Mbaka openly criticised ex-President Goodluck Jonathan of the Peoples Democratic Party (PDP) and supported Buhari who, he said had the solution to Nigeria`s challenges.
Mbaka had said Jonathan failed to address insecurity and corruption in the country, hence his support for Buhari as President.
During a church service, the clergy man was reported to have called on the National Assembly to impeach President Muhammadu Buhari if he fails to resign over rising insecurity in the country, occasioned by killings and abductions.
However reacting, the Presidency in a statement on Friday, the Senior Special Assistant to the President on Media and Publicity, Garba Shehu, said Mbaka, a staunched supporter of Buhari changed over night because the President failed to award contracts to three of his friends.
The statement entitled “Father Mbaka is everything apart from what he claims to be”, reads: “An outsider distilling the avalanche of verbiage, will be surprised that after supporting the President two times to win the Presidency, Father Mbaka has made a complete U-Turn, preposterously asking President Buhari to resign or be impeached.
“Here is the point of departure: Father Mbaka asked for a meeting and to the shock of Presidential Aides, he came accompanied by three contractors.
“The President graciously allowed them in, and to everyone’s surprise, Father Mbaka asked for contracts as compensation for his support.
“Anyone familiar with President Buhari knows that he doesn’t break the laid down rules in dealing with contracts or any other government business for that matter.
“He requested the appropriate authorities to deal with the matter in accordance with laid down rules.
“Inside the Villa, discretion prevailed, that if those pictures and requests were made public, the followers will turn against the religious leader. None of it was released. Now, this is what is eating Father Mbaka”.
On its part, the APC in its statement on Friday in Abuja by the Deputy National Publicity Secretary, warned the clergy man against statements capable of destabilizing the country.
The party threatened to expose Mbaka to the headquarters of the Roman Catholic Church and the Pope, if he continues to cause disaffection for the Federal Government with his utterances.
Nabena said it was unfortunate for a man of God who was supposed to deploy all known spiritual means to avert crisis to engage himself in politics.
He said it was disheartening that Mbaka was threatening a democratically elected government for his own personal benefit while pretending to be speaking for the people.
“One will wonder who Mbaka is emulating because the Lord Jesus Christ did not threaten to bring down the government during his own time.
“It is obvious that he (Mbaka) has been dining and wining with politicians and has found another political ally,’’ Nabena said.
“In fact, Jesus Christ obeyed and honoured a constituted authority that’s why he paid his tax; we are calling on Fr. Mbaka to concentrate on his spiritual calling and stop speaking like politicians”, the statement said.
The statement advised the Catholic priest to leave political messages for politicians, adding that calling on President Buhari to either resign or be impeached because of the country`s current challenges was ungodly.