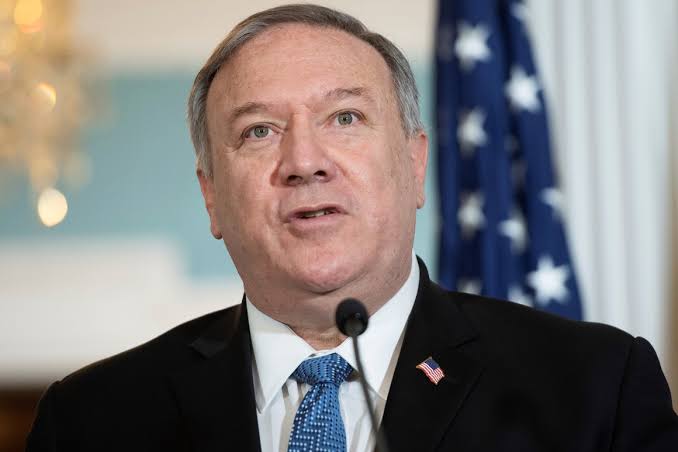 The immediate past United States Secretary of State and former Director of the Central Intelligence Agency (CIA),  Mike Pompeo, has decried the massacre of Christians in Nigeria, saying that least 1,500 Christians have been killed in the last six months.
In an article published on Wednesday in American Centre for Law and Justice (https://aclj.org/), Pompeo who served as Secretary of State under ex-President Donald Trump, accused the Nigerian government for suppressing news of the killings of Christians by claiming that it is “farmer-herder crisis.”
The article titled, “The Persecution of Christians in Nigeria Demands Our Attention”, Pompeo said, “least 1,500 Christians have already been killed in Nigeria during 2021, and even more have been kidnapped and are either being held hostage or trafficked.”
He said the attacks are brutal as “armed radical Islamic groups arrive in a village during the night, kill the men, rape and murder the women, and kidnap the children.”
Pompeo said, “Nigerian government thus far has sought to downplay the attacks, characterising them as conflicts between herders and farmers rather than as religiously motivated acts of terror.
He insists that the terrorists must be held accountable for such preposterous characterisations.
He said, “given that Nigeria has the largest Christian population of any African country – over 80 million, nearly half of its people – it is essential that this persecution is snuffed out before it becomes even worse.”

The article is reproduced below:

Every single day in Nigeria, Christians aren’t just having their right to religious freedom denied – they are being murdered because of their faith in Jesus.
I have often spoken of the importance of religious liberty to a free society. It is a foundational freedom.
No society that denies its people the right to worship according to their beliefs, or that allows that right to come under attack without consequence, can claim to be truly good.
Where religious freedom is denied or ignored, you can be sure that tyranny and oppression are soon to follow.
That is why a foreign policy that takes seriously the issue of ensuring religious freedom around the world is critical to serving America’s interests.
It is why the ongoing persecution and martyrdom of Christians in Nigeria demands our attention and action.
In 2018, 110 schoolgirls were kidnapped by Boko Haram, a radical jihadist terrorist cell. Eventually, when a deal was cut to return most of the girls home, one was held back – Leah Sharibu.
This unbelievably brave and faithful girl refused to renounce her faith as a Christian; and for that reason, Boko Haram refused to release her and condemned her to slavery. Three years later, she is still being held as a slave by this cowardly terrorist cell in northeast Nigeria.
Her story is tragic, infuriating, and emblematic of a troubling trend of Christian persecution in Nigeria.
Open Doors’ Country Report notes that today, more Christians are murdered for their faith in Nigeria than in any other country in the world.
The number of Christians murdered there increased by 60 percent in 2020. The presence of radical, jihadist Islamic groups in northern Nigeria, such as Boko Haram and the Fulani herdsmen, ensures that this ongoing persecution is likely to get worse.
I have personally met with Christian Nigerian leaders and heard their tragic stories of those who have been persecuted because of their faith.
During the Trump Administration, we took the important first steps toward dealing with this serious issue in December 2020, when we added Nigeria to the State Department’s “Countries of Particular Concern” (CPC) list. The work that the ACLJ did was very informative for our team at the State Department when we began to evaluate whether or not to designate Nigeria as a CPC.
The ACLJ contributed to the data set that underlaid the decision I made.
We did this because we recognized reality – the Nigerian government was tolerating the systematic, ongoing, egregious violations of the religious freedom of its people, allowing them to suffer at the hands of radical Islamic terror.
This designation signaled to the Nigerian government that swift action on their part was needed to put an end to this persecution, or there would be further consequences in the form of sanctions and increased diplomatic pressure.
Such a designation was part of the broader Trump Administration approach to take seriously violations of religious freedom around the world, which also included declaring the brutal policies of the Chinese Communist Party toward Uyghur Muslims in Xinjiang as genocidal. Unfortunately, the tragedy in Nigeria persists.
At least 1,500 Christians have already been killed in Nigeria during 2021, and even more have been kidnapped and are either being held hostage or trafficked.
The attacks are brutal. Armed radical Islamic groups arrive in a village during the night, kill the men, rape and murder the women, and kidnap the children.
The Nigerian government thus far has sought to downplay the attacks, characterizing them as conflicts between herders and farmers rather than as religiously motivated acts of terror.
These terrorists must be held accountable for such preposterous characterizations. And given that Nigeria has the largest Christian population of any African country – over 80 million, nearly half of its people – it is essential that this persecution is snuffed out before it becomes even worse.
The ACLJ is actively engaged in the effort to raise awareness of and demand action regarding the ongoing atrocities committed against Christians in Nigeria.
It has just filed its 18th written submission and made critical oral interventions at the U.N. Human Rights Council regarding the plight of Christians in Nigeria.
I’m eager to engage in this work with them as we seek to put a stop to these ongoing tragedies.
What is happening to Christians in Nigeria warrants serious action. America has always stood as a beacon for freedom, and we can only back up that responsibility if we take seriously our obligation to stand up for the rights of religious believers around the world.
American civil society and the American government need to hold the Nigerian government accountable for its inaction in allowing terrorist organizations like Boko Haram to fester in their nation.
If the problem is allowed to persist, it will only spread and become worse throughout Africa and around the world. The killing must end.