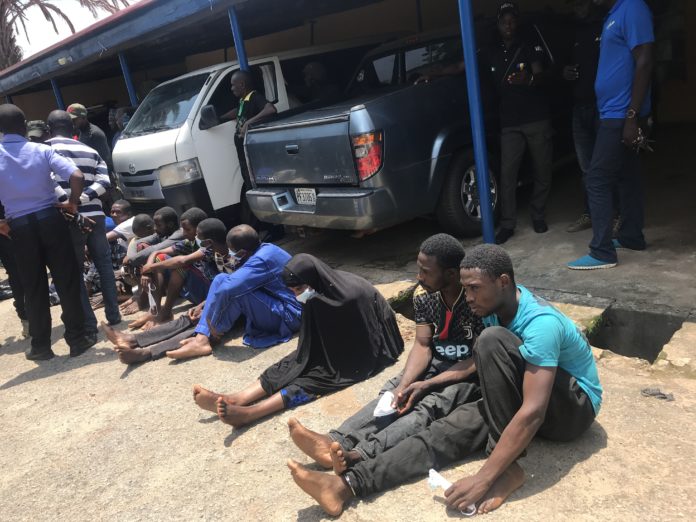 The Kaduna State Police Command on Thursday paraded two suspects in connection with the killing of Abdulkarim Na’Allah, son of Senator Bala Na’ Allah, representing Kebbi South senatorial Zone, Kebbi state.
The command also paraded
Usman Abubakar, a notorious kidnapper terrorising Chukun, Igabi and Giwa LGAs of Kaduna state.
Abubakar is also said to have
links with the recent abduction of students at Greenfield University, Bethel Baptist High School and the Federal School of Forestry Mechanization all in Kaduna.
The junior Na’Allah was killed on August 29, when the hoodlums entered his Malali GRA resident, Kaduna.
The suspects, Bashir Mohammed 22, and Nasir Salisu Balarabe 28, were said to have made away with some valuables, including a Lexus Sport Utility Vehicle belonging to the deceased.
They were said to have sold the vehicle at the cost of N1million in Niger Republic.
Parading the suspects at a news briefing, spokesman of the the command, Mohammad Jalige, said the two principal suspects in the killing of Na’Allah were arrested following investigations by the Special Intelligence Bureau (SIB).
He said the suspects sold the deceased car in Niger Republic for N1million and shared the money among themselves.
Jalige said one of the suspects is an immediate neighbour to the deceased.
He said, “On getting the report of the unfortunate incident the Command immediately ordered for a full scale investigation to be carried out by the Special Intelligence Bureau (SIB) to unravel the circumstances of the dastardly act.”
According to him, the investigation has yielded a positive result with the arrest of the principal suspects as one Bashir Mohammed who happened to be the immediate neighbour to the deceased and Nasir Salisu Balarabe.
Jalige said the suspects had “confessed that on the 28th August, 2021 at about 0100hrs, he gained access into the vicinity of the deceased residence while it was raining, climbed the roof top and removed the nails of the roofing sheets to pave way for their next move which is to kill and steal the said vehicle.
“That on the 29th August, 2021 at about 0200hrs Bashir Mohammed, Nasiru Salisu Balarabe a.k.a Uban-Daba and Usman a.k.a Dankano now at large invaded the house again and entered through the rooftop, hacked the deceased and made away with his Lexus Sport Utility Vehicle, Apple Ipad, Samsung Cell Phone, Three (3) Fabric materials of different colours and wrist watches.
“The suspects confessed to have carried out the offence and further stated that the vehicle have been sold in Niger Republic at the rate of N1million with the proceed shared amongst them”.
Jalige said investigations were ongoing with the aim of arresting the fleeing suspect for diligent prosecution.
He also said one Usman Abubakar, notorious kidnapper terrorising Chukun, Igabi and Giwa LGAs of Kaduna state was arrested by security forces following credible information.
“On the 29th August, 2021 at about 0900hrs, based on a credible information Operation Yaki Surveillance Team with FIB STS Force Headquarter Abuja jointly raided a house at Ring Road Asikolaye area of Kaduna, where one Usman Abubakar ‘m’ 41 years old, a native of Adakpa village Bukkuyum Local Government Area of Zamfara State, a Notorious kidnapper terrorizing Chikun, Igabi and Giwa Local Government Areas of Kaduna State.
Jalige said the suspects confessed to have kidnapped many people and collected several ransoms.
“He also has links with recent attacks on Greenfield University, Bethel Baptist Academy and School of Forestry Mechanization Mando Kaduna.
“Investigation has since commenced and the suspect is currently assisting the Police with vital information on how to arrest his criminal accomplices”, the police spokesman said.
He said the command has succeeded in apprehending 25 suspected criminal elements, recovered 10 different types of firearms including; English Pistol, locally made pistol, Pump Action Riffles, dane gun, locally fabricated Ak47 riffles as well as recovery of Five (5) motor vehicles of different brands.