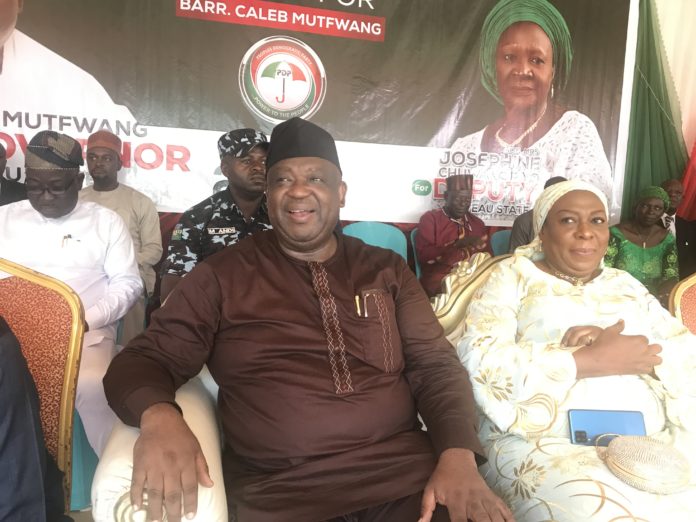 Caleb Mutfwang, the governorship candidate of the Peoples Democratic Party (PDP) in Plateau state, says he will end the incessant killings in the state if elected.
He also promised to ensure that all communities displaced by terrorists in the state returned to the ancestral homes.  Speaking during a reception by Plateau Community in Kaduna on Sunday, Mutfwang said he would lay the foundation for a Plateau that is peaceful and prosperous.
He noted that the state is blessed with good weather and good soil that can be harnessed to build an economy that is beyond oil.
According to him, Plateau, was the first in Nigeria to generate electricity, stating that his administration, will ensure that all the potentials for electricity in the state are revived and revamped to generate revenue
for infrastructural development.
He, however, decried the heavy debt hanging on the state, disclosing that Plateau is currently indebted to the tune of N220 billion.
“Destiny has bestowed on me the opportunity to come into the space of leadership on the Plateau and this responsibility I am not taking it lightly.
“I want you to know that Plateau is in trouble. Just this week, one of our sons from Central Bank, told me that as at today, Plateau has a debt burden of N220 billion.
“But by the grace of God, we will turn around the situation if elected”, he said.
Speaking further, Mutfwang said, “we are coming in to lay a foundation for a future Plateau-a Plateau that will be a land of promise, a land of peace and prosperity for generations to come.
“We want to change the ugly story about Plateau in the last several years and turned it around.
“That is our desire and our passion. There is none of us who is seated here that has not been afflicted by one problem or the other.
“By the grace of God, when I become a governor, I will not be governor of burial ceremonies.
“We want to arrest that ugly situation. The killing of our people must stopped. Our people must not be displaced.
“We will ensure that our people that have been displaced return to their legitimate homes”.
The PDP candidate said he will ensure that, Plateau state, with all the blessings God has deposited in our land – the good weather, the soil are put to good use.
Mutfwang said, given good leadership, Plateau state can prosper above many states in the country.
“We want to build an economy on the Plateau that is beyond oil revenue; that in the years to come we don’t need to be waiting for Abuja to pay salaries. We don’t need to wait for Abuja before we build infrastructure.
“Plateau was the first state in Nigeria to generate electricity. We are going to ensure that Plateau becomes a seller of electricity and not a buyer.
“We will make sure that all the potentials for electricity in our state are revived and revamped and we will be able to generate revenue from that.
“If we have peace and we have electricity, the sky will be our limit and by the grace of God, I have been privileged to have sons and daughters of Plateau who have the intellectual capacity.
“We are going to create an enabling environment for them to come back home and contribute their quota. I see leadership not as a monopoly of knowledge, but a creator of the enabling environment for people to come and flourish and prosper”, he said.