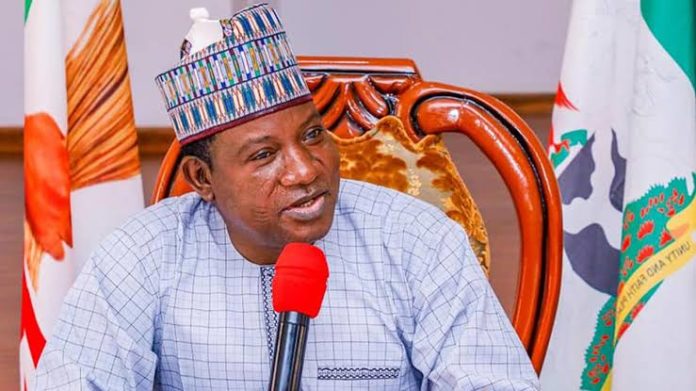 The Coalition of Plateau Indigenous Youths and other related organisations have rejected the partnership between the state government and Jaiz, an Islamic bank for the reconstruction of the Jos Ultramodern market.
The market had been in ruins for over 20 years after it was gutted by a mysterious fire, is to be reconstructed by the Islamic bank in three phases through public, private partnership (PPP) at the cost of N9.4 billion.
However, the Coalition of Plateau Indigenous Youths, kicked against the move, saying “Jaiz Bank has continued to heighten the suspicion of Plateau citizens given its religious credentials and biases”.
In a statement issued on Monday in Jos, the group which is made up of over 30 ethnic nationalities in the state, warned the bank to “withdraw from the partnership and reverse all commitments made regarding the contract as the youths may be left with no option than to take necessary actions to protect their interest.”
The group also expressed concern over the alleged “award of bogus, unrealistic so-called ‘legacy projects’ of about N50 billion” by the outgoing administration of Governor Simon Lalong.
The statement which was jointly signed by Zachariah Awang, Chairman of the coalition and the General Secretary, Amb. Duwam Bosco, said Lalong whose administration terminates in May 2023, “lacks the legitimacy to mortgage the financial viability of Plateau State and indeed, the future of the youths in a dubious contract/MOU with Jaiz bank lasting 40 years.”

The statement reads:
“The Coalition of Plateau Indigenous Youths and other related organizations in Plateau State in collaboration with Plateau Daughters in the University of Jos, agreed to issue this Press Statement rising from a very crucial meeting, held in Jos which inter alia, assessed the trending uproar arising from the unpopular awarding of Jos Ultra Main-Market construction to Jaiz Bank plc.
“Deeply concerned about Plateau; the unacceptable piling debts of the State government, the award of bogus unrealistic so-call legacy projects of about N50 billion and over inflated Over-Head Bridge at British/America Junction and now, a very unfavorable poorly negotiated Jaiz Bank/Government MOU on the Jos Ultramodern Main Market Contracts being pursued belatedly only to serve as conduit pipes to drain scarce public funds of the State as well as selfish desire to commandeer shops and allocate same to so-call party’s stakeholders and other cronies.
“We equally note the fact that the tenure of Lalong’s administration shall expire come May, 29th, 2023. Therefore, he lack the legitimacy to mortgage the financial viability of Plateau State and indeed, the future of the youths in a dubious contract/MOU lasting 40 years.
“This is reckless, biased and evil for anyone that calls himself a patriotic leader.
In fact, we are aware of the racketeering behind the injurious MOU entered into for selfish gains and kickbacks.
“It is reliably gathered that the House of Assembly is complicit on this matter as it remains quiet with no open condemnation of this strange development.
It is on this note that citizens cannot trust the lame duck House of Assembly which has been a rubber stamp parliament failing to carry out proper oversight functions on the super-powerful Executive.
“We are all aware that Government has openly demonstrated its sectional and nepotistic patronage in the award of contracts which lacks equity and a fairness.
“This is why the Indigenous youths strongly believe that the Jaiz MOU is inimical to its interest now and in the future.
“Further concern that the choice of Jaiz Bank continues to heighten the suspicion of many Plateau citizens that given its religious credentials and biases, it’s waging a holy war (jihad) through buying and mobbing of the assets of infidels who according to them, need to be financially and economically subdued.
“Resolved to speak up, reject and mobilize for the liberation of our dear State from the claws of corruption and maladministration as well as dubious contracts.
“Calling on all men and women of conscience, the youths, NGOs and other civil society organizations to rise up in unity to unequivocally condemn this despicable decision of the Lalong Government.
“Warning Jaiz Bank to withdraw and outrightly reverse all commitments made with regard to Jos Ultramodern Market as the youths of the State will be forced to take necessary actions to protect their interest in the State should the the Bank persistently remains adamant.
“The Lalong’s administration should desist from the ill-conceived last minutes decisions that jeopardize the collective interest of the Plateau people particularly, the youths.
“As a first step, ALL YOUTHS in Plateau State are required to join a PEACEFUL PROCESSION at the Secretariat Junction by 8:30am on Monday, 1st August, 2022 to declare our fearless, candid position and stand on Jaiz/Government MOU which is scheduled to be signed tomorrow or Tuesday of the first week of August, 2022.”