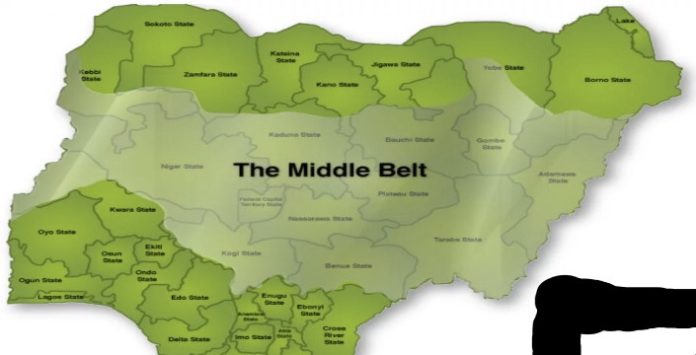 The Middle Belt Forum (MBF), has said that the persistent killings and destruction of property by bandits is pushing the country to the brink.
In a communique issued at the end of its National Executive Meeting (NEC) on Saturday in Akwanga, Nasarawa state, the forum warned that henceforth, the people of the middle belt region shall respond to any further attack on its communities.
The meeting was attended by former Plateau governor, Senator Jonah Jang, Senator Barnabas Gemade and Grp. Capt. Dan Suleiman (rtd) among others
The communique which was read by Hon. Jonathan Asake,
President, Southern Kaduna People’s Union (SOKAPU)
condemned “the lackadaisical attitude” of the federal government in protecting the lives and property of the citizenry.
The forum said the spate of insecurity was pushing the nation to precipice, stressing that the killings in the country has assumed a genocidal level.
“The Middle Belt should rise up and defend themselves in the face of governments abandoning their constitutional responsibility of defending them or seeming complicity”, the forum said.
It called on the federal government to take urgent steps to arrest the situation and save the country from another civil war.
The MBF said, “These attacks have left in their trail mind-boggling massacres and devastations in our communities and displacement of indigenous peoples to various IDP camps.
“Any attack on any of our communities is henceforth, considered as an attack on all communities in the Middle Belt Region with the attendant responses and consequences”.
The forum also demanded the setting up of a commission to address and provide relief to victims of attacks.
“NEC calls on the government to set up an agency to be called the Middle Belt Development Commission to serve as an intervention agency in addressing the challenges caused by the activities of these terrorists”, the communique said.