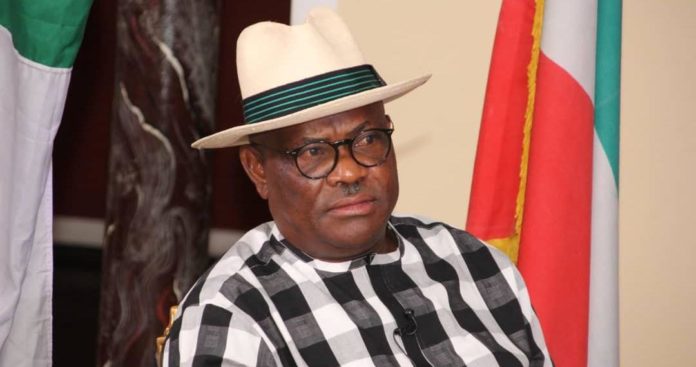 Rivers State governor, Mr. Nyesom Wike has said that for the Peoples Democratic Party (PDP) must unite to win the 2023 elections.  The governor spoke on Monday in an interview with journalists during a visit to former National Caretaker Chairman of the party, Senator Ahmed Makarfi at his residence in Kaduna.
He said the ruling All Progressives Congress (APC) has failed the country and Nigerians are looking up to the PDP for a way forward.
According to him, if the PDP is united, it can be sure of victory.
Wike called on party members in the state to unite and work for the victory of the PDP.
“My ambition is for PDP to be reunited. If you have a united party then you are sure of victory. Does it make sense if you have a presidential ticket of a party and the party cannot win election.
“So for me, the unity of the party is paramount. It is not about going about (saying )you want to be President
For me it is how the party united and fight this evil, this monster they call the All Progressives Congress”, he said.
Wike said his visit to Makarfi had nothing to do with Presidential ambition but to extend best wishes to the former governor of who recently returned home from a medical treatment in London.
“I came here to see one of our leaders who has done well for the party. Why I came here has nothing to do with presidential ambition”, Wike said.
He commended the PDP in Kaduna state for winning most of the councilorship elections during the 2021 council polls.
“It is surprising to me as an opposition party the number of councillors PDP won in the last Local Government Elections.
“It has never happened so we need to encourage them to let them know that we know what they are facing and they have support from us and that is why I came here”, the governor said.
Also commenting on the controversy over zoning the presidency, Wike said the party will meet and take appropriate decision, stressing that the most important thing is producing a candidate who have the capacity no matter where he comes from.
Wike said: It is not a one man decision, whether you zone it (Presidency) to West, East, North, what is important is somebody that have the capacity to move Nigeria forward.
“Nigerians are waiting for us and we must bring somebody who has what it takes to move Nigeria from where we are now to what every Nigerian expect.
“We have many people who have what it takes. But at the appropriate time we will sit down and move forward.
“For me, I have no other place other than PDP. When people hear me come out, they think I have special interest.
The special interest I have is that this party should not be killed.
“It is important that we must work together not to go about telling people about Presidential ambition
Time will come when PDP will look at those qualified. We are not going to based it on the fact that you are from south or north.
“Even if it is zones to the South or North, we will sit down and look at people who have the capacity…
Earlier while addressing Makarfi and state PDP leaders, the governor said the PDP is the only party in Nigeria that has hope.
“I didn’t come here to tell you that I want to run for President.
“There must be party first of all for you to run for president. Our own is to make sure that our party is intact.
“Tomorrow (Tuesday), I am going to Plateau to tell Useni, to tell Jang that we cannot continue the way we are going…
“APC has finished Nigeria, let nobody tell you any other story, Plateau people will not forgive them if they don’t take back the state”, he said.
He extolled Makarfi’s leadership and contributions to the PDP and expressed gratitude to God for healing him.
Responding, Makarfi thanked Wike for the visit and for his tremendous support during his tenure as the National Caretaker Chairman of the PDP.
Makarfi said with unity and perseverance, the PDP will win the 2023 Presidency.
“We have to be united beacuse a dead party cannot win elections.
“We will be disappointing Nigerians if we do not come together to salvage the country. There is alot of work to do..” he said.