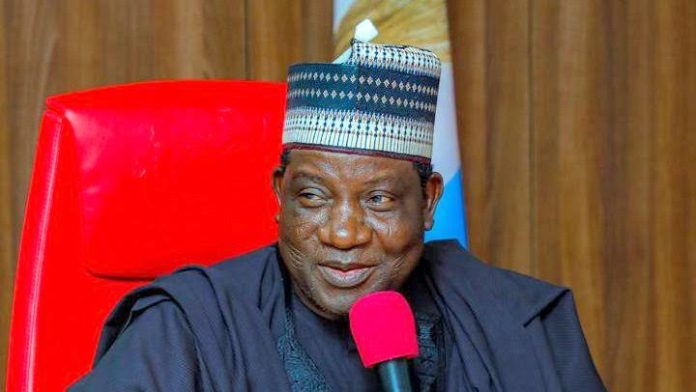 The Peoples Democratic Party (PDP) in Plateau state, has issued a three- day ultimatum to the state governor, Simon Lalong to return to his duty post or face the wrath of the people.
In a statement on Friday in Jos, the PDP accused Lalong of abandoning governance and wasting public resources on unnecessary travels.
The statement signed by the party’s spokesman, John Akans, said the governor has been desperate following the rejection of his successor by stakeholders in his ruling All Progressives Congress (APC) in the state.
Akans said, the PDP in Plateau, “has observed with concern that since the controversial state APC primaries that scandalously produced “Dr. Nentawe Yilwatda, as its governorship candidate, Governor Simon Lalong has abandoned governance in the state and relocated to Abuja where all the other aspirants have laid siege in that regard.
According to the statement, “This has made the governor restless and sleepless as he desperately pushes for his acceptance by Abuja, especially after the emergence of the APC Presidential candidate, Asiwaju Bola Tinubu, whom Lalong fiercely worked against during the primaries.”
The PDP maintained that “Lalong seems to be the unofficial campaign director of Yilwatda as he intensifies lobbying the national leadership of APC to accept the candidature of Yilwatda who was allegedly elected under a scandalous and controversial circumstances with fake delegates.
“Since then, Lalong has hardly been in Jos.
“Unfortunately, the governor declared Monday to Tuesday public holidays to enable civil servants participate in the continuous voter registration, but he himself has not been on the ground to give encouragement.”
Akans said, “Lalong was not elected as Chairman of (Northern) Governors forum or campaign DG of candidates, but as an administrator of Plateau state, though he has failed woefully in his responsibilities.
“Today, the insecurity crisis in the state and the collapse of infrastructure, education and governance is giving Plateau people bitter experience of their lives.
“Crime, especially kidnapping and killings, has been on the increase in Plateau State, with workers on strike.
“For this reason, we hereby give Lalong three (3) days ultimatum to return to Jos or face mass action.”