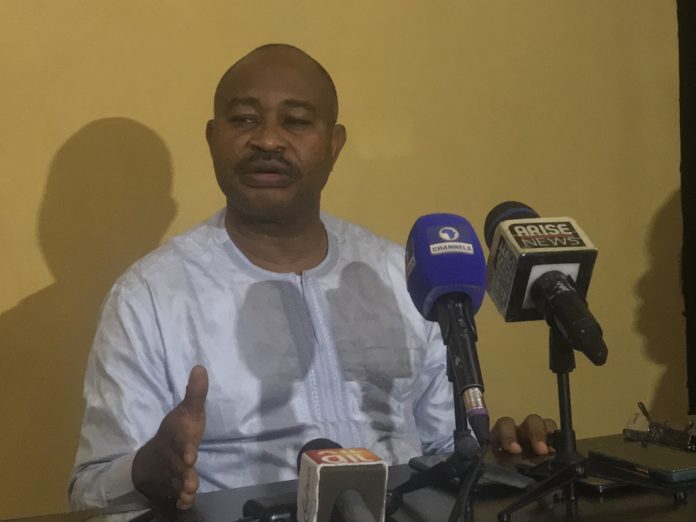 The General Secretary of the Evangelical Church Winning All (ECWA), Rev. Yunusa Nmadu has said that Governor Nasir El-Rufai’s recent admission that terrorists were running a parallel government in Kaduna state was an “admittance of failure coming a little too late”.
Speaking in an interview with journalists in Kaduna, Nmadu said the Christian Association of Nigeria (CAN) in Kaduna and other individuals had been singing about the issue a long time ago, but the state government tried to counter them.
El-Rufai, had in a leaked memo to President Muhammadu Buhari, was said to have raised the alarm that terrorists are consolidating their grip on communities in Kaduna with a parallel government and permanent operational base.
The ECWA General Secretary said, “Governor EL-Rufai is admitting too late in the day. It has been there, CAN has been singing it, some of us have been saying it and they tried to counter what we said.
“We have two governments in some of the northern states.
“Our churches are all over the country. There are places today where the bandits collect taxes. And you must give the tax if you want your wife to be protected from rape. These are reality”, he said.
Nmadu, a former secretary of Kaduna chapter of CAN, said in some communities people cannot go to their farms unless they pay money to the bandits to avoid attack.
He said, “We have two governments and it is an admittance of total failure on the part of government.
“I was once the Secretary of CAN in Kaduna. We have witnessed so much violence, killings and destruction under the Buhari regime.
“In the last seven years, people are being killed and kidnapped, places of worship have are being destroyed almost on a daily basis”.
According to him, criminals became emboldened under the Buhari regime.
He noted that “over the years there were crisis, violent attacks on churches, it graduated to looking for human beings to kill.
“As you know, we have graduated from that to terrorism which is what we are facing now.
“This is what we felt will happen as predicted because with the coming in of President Buhari, the criminals who were at the fringes, will be emboldened to do more…
“You can not devulge this from the statement that he made before he became the President – statements like, his people were being killed when Boko Haram were being decimated by the national forces…”
Nmadu who is also the Chief Executive Officer (CEO) of the Christian Solidarity Worldwide (CSW-N), also described the recent threat by the National Assembly to impeach Buhari as hypocritical.
He said the lawmakers were just woking up to the reality of things because they are now feeling the hit of insecurity.
“My problem with Nigerian is that we are highly hypocritical.
“Let me give you an example. If there is a dangerous pot hole on the road, it will not be fixed, except when a notable person has an accident on the spot.
“Before you knew it, they will fix the pot hole. It looks like the life of the common man does not matter in Nigeria.
“The senators are just woking up to the reality too late in the day and I think it is because they are now feeling the hit of insecurity.
“I don’t see any seriousness in what they are saying. It has died down…I think the just woke up because it has started affecting them and their relations.
“Secondly because election is near and they want to go back to their constituencies to win election. I think they doing this to make people feel they are concerned about the common man.”
Also commenting on the Muslim-Muslim Presidential ticket of the All Progressives Congress (APC), the clergyman said,
those who are planning Muslim – Muslim tickets either in Kaduna state or at the federal level have failed the exam already.
According to him, “Those who are planning Muslim – Muslim ticket either in Kaduna state or at the federal level, to be categorical, they have failed the exam already.
“This is not in the interest of Muslims neither is it in the interest of Christians.
“I will never support same faith ticket even if it is the Christians where both faith have substantial population.
“Of course there are states that are predominantly populated by Muslims, you cannot go there and ask for Muslim- Christian ticket, that is understandable.
“There are also states that are predominantly Christians, you cannot go there and ask for Christian – Muslim ticket. It is understandable.
“I don’t know anybody in their political calculation will ever think that they will win election in Nigeria without the Christians or win election in Nigeria without the Muslims or even people without faith.
“This is our country, we are so divided. In the last seven years the gap has increased so wide.
“It is expected that any government that is coming in 2023 should emphasis on unity and how to bring the people together.
“Same faith ticket by the APC is dead on arrival. It is not in the interest of the unity of our country. I think that those who are even pushing the candidate to do this do not mean we’ll for him … they want him to fail election.
“They are misleading him so that he can fail and fail very well…Some of the reasons they gave for this same faith ticket is so mundane, so unintellectual.
“They said we should be concerned about those who will come to fix the country and not concern about religion.
“Are we saying that those who can fix the country are only found in one faith?
“They are also saying that it is competence, I find that very insulting to other religious groups…That argument doesn’t hold water at all.”