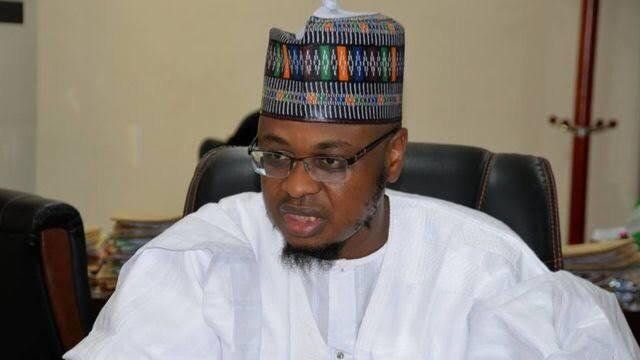 The Peoples Democratic Party (PDP), has said that the Buhari Presidency is a haven for traitors who are providing support to acts of terrorist activities in the country.
In a statement on Friday in Abuja, the party maintained that the presidency’s support for the Minister of Communications and Digital Economy, Dr. Isa Pantami
has revealed why the current war against terrorism has not been completely successful.
Nigerians have been calling for Pantami’s resignation or sack after videos of his utterances in the 2000s went viral on the social media.
In one of his sermons in the 2000s, he said he considered al-Qaeda founder, Osama Bin Laden, a better Muslim than himself.
In another video, Pantami said he was happy when infidels were massacred.
In yet another audio and video recordings of his prayers and sermons as an imam, Pantami volunteered to lead the Hisbah (Sharia police), to Shendam in Plateau state, during the bloody religious conflict that engulfed the area, to fight in defence of Muslims.
Despite Pantami’s regrets over his past utterances, Nigerians have continued to demand for his resignation or sack.
However, the Presidency through Garba Shehu, Buhari’s spokesman, said the administration “stands behind Pantami”, insisting that the minister had apologised.
But the PDP in a statement by its spokesman, Mr. Kola Ologbondiyan, accused Buhari of being insensitive to the result of actions and public comments by individuals like Pantami.
The statement said, “Nigerians were traumatised that the Presidency could mount a hopeless defence and justification for the actions of the exposed Minister of Communication and Digital Economy, Isa Pantami, who had already confessed to supporting terrorist groups like al-Qaida and Taliban.
“It is instructive to note that this anti-people stance has heightened public anxiety that the Buhari Presidency is a haven for traitors who are providing support to acts of terrorist activities in our nation.
“Our party holds that this has further exposed why the Buhari Presidency has failed to decisively confront terrorism, as well as why terrorists, bandits, kidnappers and insurgents are emboldened to ravage our nation and massacre our compatriots.
“Our party notes that if indeed, the Buhari Presidency has not found itself entangled, the least it ought to have done in the face of allegations against Isa Pantami was to reassure Nigerians by first relieving Isa Pantami of his office and hand him over to the appropriate agency for deradicalisation.
“The PDP holds that Isa Pantami belongs to the deradicalisation centre and not in any way in the Federal Executive Council where he been alleged of compromising our national security as evinced in his initial denials.”
Ologbondiyan said further that, “As a party, the PDP charges President Muhammadu Buhari to reassure the citizens by immediately withdrawing the statement from his Presidency, relieve Isa Pantami of his position as minister and take a bold step to flush out terrorist apologists from the Presidency”.