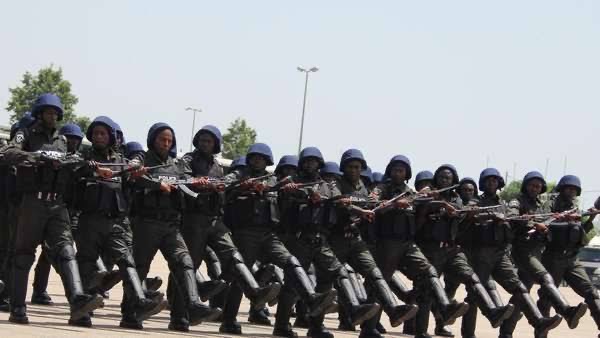 Over 2000 police personnel have been deployed to Plateau state to ensure a crime free Eid-El-Fitr celebrations in the state.
Spokesman of the command,
Gabriel Ubah, disclosed this in a statement on Tuesday in Jos.
He said the federal and state governments directives on the enforcement of COVID-19-19 protocols would be enforced.
The command called for the cooperation of the peace loving residents of the state to maintain law and order during the festivities.
“There will be prayers on all Eid grounds, Area/Ward Mosques exception of the Rukuba Road praying ground.
“Muslim faithfuls should adhere to COVID-19 protocols such as social distancing, use of hand sanitizers and wearing of face mask etc as the
Presidential Task Force on COVID-19 will be moving round to ensure compliance”, the statement said.
The police also announced a total ban on the use of tricycles (Keke) on Wednesday 12th May, 2021) within Jos metropolis and Bukuru areas of the state.
It added that, “All recreational centres such as the National Museum, Zoo, Wildlife Park, etc in the State will be closed down for Wednesday 12th and Thursday, 13th May, 2021.
“The ban on the sale and use of fireworks such as knockout, bangers and other explosives is still in force and violators will face the wrath of the law.”
The statement urged parents and guardians to counsel their children and wards not to indulge in drugs abuse as well as any other form of anti social activities.
The statement further called on citizens to be security conscious and give useful and timely information to the police and other security agencies “in order to curtail the pre-sallah illegal activities of Sara-Suka and other cult groups.”
“Accordingly, residence should call the Command’s emergency hotlines for vital information and complaints via: 07059473022, 08038907662 and 09053872296.