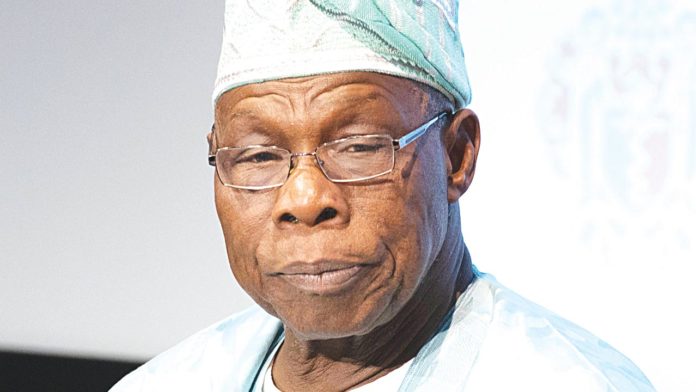 Former President Olusegun Obasanjo on Sunday blamed annulment of the June 12, 1993 Presidential election presumably won by late business mogul, Moshood Kashimawo Abiola, on “bad belle.”
The regime of military President Ibrahim Babangida (IBB) annulled the election.
Speaking shortly after his investiture as a Trustee of the Abeokuta Club, a sociocultural organisation of Egba people of Ogun State, Obasanjo expressed regrets over the cancellation election, lamenting its effect on the people of Abeokuta.
MKO Abiola was equally awarded a posthumous Vice-Patron of the Club during its 46th President Party held at the secretariat in Abeokuta.
The former President who recalled that Abiola was his school mate at Baptist Boys High School, Abeokuta, said he richly deserved the award bestowed on him by Abeokuta Club.
Obasanjo said the cancellation of June 12 election robbed the Egbaland the rare opportunity to have three of its prominent sons, occupy the seat of president, at different times.
Apparently referring to former Head of Interim National Government(ING), Chief Ernest Shonekan, himself who ruled Nigeria, first, as a military Head of States and later two-time civilian president, Obasanjo noted that Abiola would have become the third, if 1993 poll was not cancelled.
Obasanjo said “I want to thank the (Abeokuta) club for this honour being bestowed on me and the honour being bestowed on my schoolmate MKO Abiola which he richly deserved.
“Kabiyesi, the Alake (of Egbaland) alluded to it. Normally when you win a cup three times, you keep that cup. Isn’t it? If not for bad belle (hatred), Abeokuta would have produced President of Nigeria three times, in which case we should have kept it permanently.
“But be that as it may, we have a great heritage and we should be proud of our heritage.”
Obasanjo, however, pledged his commitment to the development to the Club, Ogun state, Nigeria and the world.
“I want to say this, I will continue to contribute my quota to the development and growth of this club and by extension, the development and growth of Abeokuta, of Ogun State, of Nigeria, of African and indeed the of world in whichever way I could,” he said.
Alake and paramount ruler of Egbaland, Oba Adedotun Aremu Gbadebo while presenting the plague to Obasanjo, described Obasanjo and MKO Abiola as proud sons of Abeokuta, adding that some “bad blood” didn’t allow Abiola become President.
Reported by Daily Trust

MUMU Ticket: its Hamans who will plot to annihilate Gods people