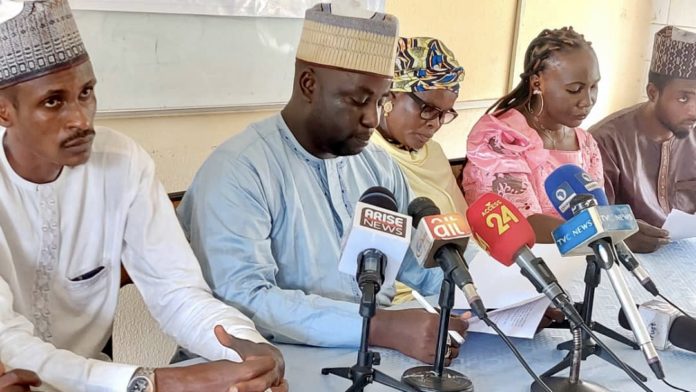 The Concerned Northern Forum (CNF) in Conjunction with some civil society groups have called on President Muhammadu Buhari to remove petroleum subsidy.
The group also kicked against the N48 billion pipeline security contract awarded by the federal government to Government Ekpemupolo, popularly known as Tompolo, a former Niger Delta militant leader. Addressing a press conference on Sunday in Kaduna, Ibrahim Bature, Chairman of CNF, said petroleum subsidy “is the greatest crime being perpetrated against Nigerians”.
The group said, “the subsidy regime which has regularly stopped the Nigerian National Petroleum Company (NNPC) from contributing revenue to the federal government, has stunted infrastructural development.
Bature called on the federal government to consider the removal of the subsidy so as “to take the feeding bottle away from the mouths of cartels stealing our common wealth”.
The group also faulted claims by the NNPC and the Ministry of Petroleum Resources that an estimated 200,000-400,000 barrels of crude are stolen per day, arguing that Auwal Gambo, Chief of Naval Staff and Hamid Ali, Comptroller General of the Nigeria Customs, who are in charge of security at land and sea borders had in recent statements,
dismissed such claims as outrageous and unrealistic”.
“We wish to call on Mr. President to look critically into the position of both the Nigeria Custom and Nigerian Navy over the outrageous claims of theft in the oil and gas sector by the NNPC.
“Our group deduced that the subsidy regime which has regularly stopped the NNPC from contributing revenue into the Federation Account is the greatest crime being perpetrated against Nigerians…” Bature said.
The group further declared that it is “vehemently opposed” to the pipeline Surveillance Contract the NNPC awarded to Tompolo, insisting that “it should be terminated with immediate effect.”
The CNF urged the federal government to channel the N48 billion contract to addressing the developmental and environmental challenges in the Niger Delta region.
Bature also called on the President to immediately sack the Head of the Nigeria Communication Satellite (NIGCOMSAT) “for failing to effectively cover the territory and expose crime to the relevant authorities.”
The group asked Buhari to declare a state of emergency in the NNPC “by appointing a military administrator to watch over the affairs of the company pending when investigations will be concluded into the subsidy regime that cost the country trillions of naira annually.”
The group commended the National Assembly for initiating the ongoing probe into the subsidy regime and urged the lawmakers to make the process public, through live broadcast.
“We have realised that the real oil theft is not done on the pipeline but in the office…
“We urge the federal government to please listen to our clarion call and do the needful…” Bature said.