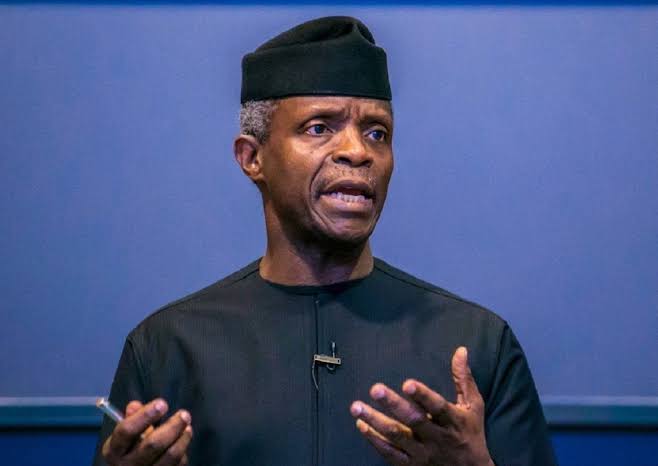 The Coalition of Arewa Youth and Women has asked President Muhammadu Buhari to endorse Vice President Yemi Osinbajo as his successor in 2023.
The Vice President is among the 23 Presidential aspirants of the ruling All Progressives Congress (APC).
Buhari, had at a recent meeting with the APC governors, solicited for their support in picking his successor.
The northern group, in a statement on Wednesday in Kaduna, said Osinbajo described Osinbajo as a detribalised leader who has with capacity to succeed Buhari as President.
The statement signed by Mohammed Lawal, spokesman of the group said Osinbajo is the most competent and trusted among aspirants.
“Although there so many presidential aspirants, but only one of them is standing taller, higher, more competent, accepted, tested and trusted”, the group said.
The statement noted that Osinbajo, a professor of law had performed creditably well when he acted as president some years ago, stressing that he is an “investment Cesar and an exceptional political breed”.
The group said mong those aspiring to succeed Buhari, Osinbajo, stand out as the most experienced and most competent.
“His antecedents says much about him, his record breaking performances that have earned him nothing other than an un-alduterated respect, love, reverence and admiration by the people.
“Across Nigeria, from the North to the South, East to West, you find Professor Yemi Osinbajo with the Muslims and Christians, Hausas, Yorubas, Igbos, Igede, Idoma, Ibibio, Ekwere, and others for unity, peace and development to prevail in Nigeria.
“He is a de-tribaliise Nigerian, a man who is defined by his humanity, philanthropist and respect for all regardless of tribe, religion and political affiliation. He is indeed, a symbol of national unity”, Lawal said
According to the group, Osinbajo is a bridge builder who will unite the country and address the economic and security challenges facing Nigerian.
The statement said Osinbajo’s wealth of knowledge as a university teacher, commissioner of justice and Attorney General of Lagos state and Vice President stand him out as one with sufficient experience to be President of Nigeria.
The statement maintained that, “By far, Professor Yemi Osinbajo is the most active, intelligent and creative Vice President Nigeria had ever produced.
“This is evident in the initiation and sustenance of the largest social investment programmes in Africa, which comprises of the N-Power Programme, currently employing 500,000 graduates; the GEEP loans (Market Moni, FarmerMoni and Trader Moni), providing credit to over 3 million Nigerian traders, artisans and businessmen; the Home-Grown School Feeding Programme, amongst others.
“The Economic Sustainability Plan is also one of his initiatives that is creating rooms for millions of Nigerians to benefit from several packages like MSME Survival Fund, Youth Fund, Mass Housing Programmes, Farmers Fund, Teachers’ Welfare Scheme, and the likes…
“Professor Yemi Osinbajo has also used his office as the Vice President to add to the economic strength of Nigeria by inviting foreign investors who saw and believed in the potentials of Nigeria to come and invest.
“These and many other initiatives of his has helped in stablising and boosting the economy, contributing greatly to reduction of poverty and creation of more jobs for our teeming youths…
“As acting President, he sacked the then DSS DG Mal. Lawal Daura, for his reckless invasion of National Assembly.
“Sacked all the directors in the Nigerian Civil Aviation Authority for negligence and incompetence that were capable of killing innocent Nigerians…
“With such unbeatable track records of this distinguished Pan – Nigerian of our time, a symbol of national unity, a true federalist, full of integrity, we are left with no option but share this with Nigerians as the reasons why Professor Yemi Osinbajo should be the successor to President Muhammadu Buhari.”