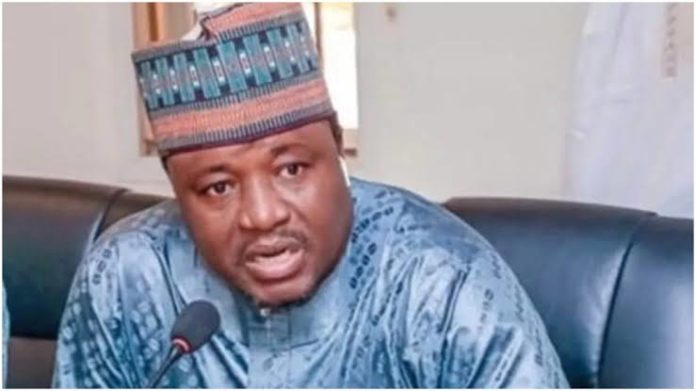 The Arewa Youth Consultative Forum (AYCF), has kicked against the decision of governors of the ruling All Progressives Congress (APC), in the north to zone the Presidency to the south.
Addressing a news conference on Sunday in Kaduna, Yerima Shettima,  national president of the of AYCF, maintained that the decision of the governors was undemocratic as it is the prerogative of voters to decide whether to vote for a Northerner or a Southerner.
The AYCF called on “all Northerners of good conscience to reject this wholesale disenfranchisement of innocent Northern voters in broad daylight, by the governors.
Ten governors of the APC had in a statement at the end of their meeting on Saturday night, declared support for powershift to the south, asking northern presidential aspirants to step down.
However, the AYCF, described the governors action as an opened disdain to the ethics of democracy, by trading off the north’s right to participatory democracy.
“We have been following with keen interest the open disdain for the ethics of democracy by 11 Northern Governors (of APC) who, willy-nilly traded off our region’s right to participatory democracy by taking a stance on direct powershift to the South.
“We are deeply disturbed that in addition to their failure to save the North from massive poverty, insurgency, banditry and kidnapping, they are turning around to deny us the right to freely choose where our people want the next president to come from”, Shettima said.
He added that as a group that upholds the ethics of democracy, the AYCF feels duty bound to call the governors to order.
Shettima argued that, “It is undemocratic to zone Nigeria’s presidency to the South in 2023 because it is the prerogative of voters to decide which candidate they would like to vote for, whether a northerner or a southerner.
According to him, the action of the governors, amounts to imposition as the masses were not consulted on the way to go.
The group said, the 11 (APC) Northern governors did not make effort to consult their people in the region, “before their wholesale endorsement of the declaration for a Southern presidential candidate.
“An important pillar of democracy, which is consultation with the masses, is out of the question because our governors would rather pretend that their wish is supreme”, Shettima said.
He said going by the decision of the governors, “it is now abundantly clear to innocent Northern voters that their mind is being conditioned to accept a purely selfish and shameful political agenda of relinquishing power on a platter of gold , like the military was doing in the past”.
Shettima said the forum is
“deeply worried that the dream of having new faces at the helms of affairs of our democratic institutions has now been deliberately killed by self-serving governors of the North.
The group alleged that the “real agenda of the governors is to deliberately blackmail Buhari into doing their bidding”.
The group called on President Buhari never to succumb to the “governors cheap balckmail of selling out our people’s right to vote the real candidate of their choice – whether a Northerner or not.”