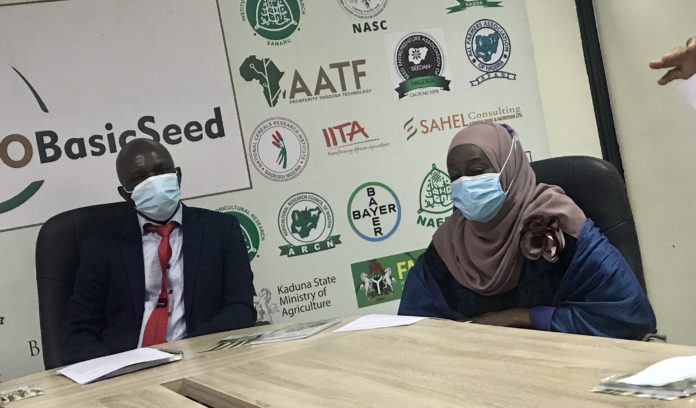 The Managing Director of ECOBASic Seeds, Brighton Karume, has said that Nigeria has the capacity to double its maize production and achieve self sufficiency, if 50 per cent of maize farmers across the country adopt hybrid maize seed varieties.
Addressing a press conference at its head office in Kaduna, Karume, said currently over 90 percent of the Early Generation Seed (EGS) – breeder and foundation seed sourced in Nigeria are from research institutions.
He noted that only 10 per cent of Nigerian farmers plant hybrid varieties, a situation, which according to him, had made it impossible for the country to meet the national demand for maize.
He said research institutions have been struggling to meet the rising demand for high-quality foundation seed from seed companies due to inadequate financial and technical support.
“This has a huge impact on the productivity and profitability of indigenous seed companies which ultimately limits farmers’ access to high-quality seeds,”he said.
He added that closing the national maize production and demand gap requires concerted efforts by players across the value chain.
“At the core of this effort is the need to accelerate awareness and widespread use of improved, disease-resistant hybrid maize seed varieties that can resist striga and fall armyworm infestation thereby boosting yield. It all starts with the right seed”, he said.
He maintained that, “If 50 per cent of farmers adopt and plant hybrid varieties, this singular act can double the country’s maize yield from the current two metric tones per hectre to over four metric tones per hectre, thereby causing annual production to increase to about 20 metric tonnes .”
Karume stated that, ECOBasic Seed was established to bridge the existing gap in early generation seeds production in Nigeria so as to drive the sector with high quality seeds.
He said the seed company will ensure supply of foundation seed solutions to local seed companies with the objective to produce and supply foundation seed of the highest quality and purity for Nigeria and the West African sub region.
“It is a business-to-business model where ECOBasic Seed will sell foundation seed to seed companies for their certified seed production that is used by farmers”, he explained.
According to him, ECOBasic will focus on production of genetically pure foundation seed so that the true potential of the hybrids is realized, transform OPV seed maize companies to produce hybrid maize seed.
He said the company was established by the Africa Agriculture Technology Fund (AATF), Alliance for a Green Revolution in Africa (AGRA) and the Seed Entrepreneurs Association of Nigeria (SEEDAN) to produce and supply foundation seed of the highest quality and purity to seed companies in West Africa.