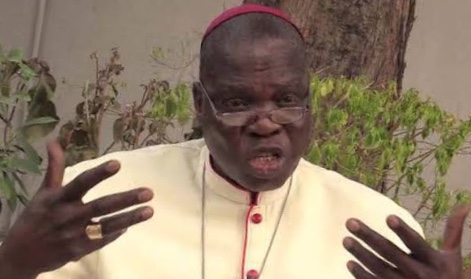 The Catholic Archbishop of Kaduna, Rt. Rev. Matthew Man,Oso Ndagoso has called for a partnership between the government and the church in the provision of health and social services to the people.
Speaking on Wednesday at the handing ceremony of a Dialysis Centre, donated by Bijo Foundation to St. Gerald Catholic Hospital, Kakuri, Kaduna, Ndagoso, said Catholic Church is noted for its strides in the development of communities.
“The Catholic church has been in the fore front for development, building schools, hospitals and providing social services for the common good without any discrimination against anybody.
“Your religion doesn’t matter to the Catholic Church. Our schools, our hospitals have enable us to walk the talk, to make the gospel, a reality in the lives of people.
“We were able to do the good things we did because we were in full partnership with the government,” he said.
Ndagoso, however lamented that unfortunately, what “happened in the 1970s destroyed that partnership with government and our people are the worst for it.”
“I have alway said the meeting point for the government and the religion is the people. The same people that come to church, the people that go to the mosque are the same people that government needs and so the people are the meeting point between the government and the Church”, he said.
According to him, “the Catholic Church is ever ready to partner with the state government in the the provision of health and social services.”
Ndagoso disclosed that at the beginning of the COVID-19, last year, the Catholic Church offered its 430 health facilities across the country to assist, “but the government didn’t accept the offer for whatever reasons they know.”
He stressed that collaborating with the church and the state will be of immense benefit to the people in terms of providing basic amenities
The clergy man cited an example of the former governor of Anambra state, Mr. Peter Obi, who according to him, collaborated with the Catholic Church in the education and health sectors in the state, stressing that Anambra is number one in terms of health and education.
“Here in the north we are always coming last in everything, we must keep religion aside and focus on giving functional education to our own people” he said.m
According to him, Bijo Foundation is an individual who is collaborating with us because he knows that what he is giving us will serve the people.
He appealed to the management of St. Gerald to manage the facility properly, warning that the good will that Bijo Foundation has extended to the church must not be destroyed.
Also speaking during the event, the Kaduna state commissioner for heath, Dr. Amina Mohammed-Baloni, commended
Bijo Foundation for donating the centre and challenged other well meaning individuals to do same.
She said the Catholic Church has been a friend of the health sector in the state and urged the hospital to ensure proper management of the centre.
Speaking earlier, the Managing Director of Bijo Surgical Ltd, Mr. Ikechukwu Akansi Jnr said for decades, Bijo Surgical has been giving back to the society through philanthropic gestures and corporate social responsibilities.
He said, in addition to donating the centre, “we intend to provide a monthly budget to support those who can’t afford to foot the bill for medical dialysis.”