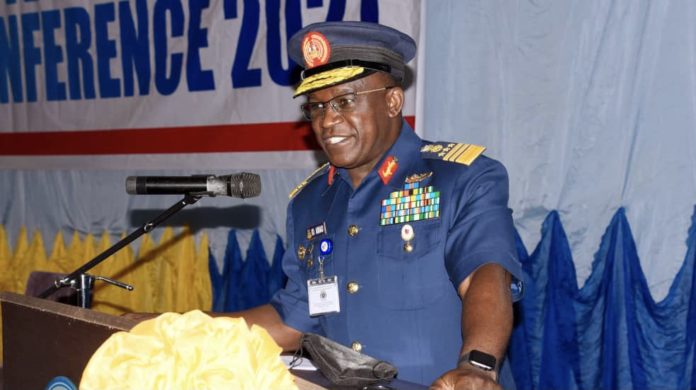 The Nigerian Air Force (NAF) has approved the established of Directorate of Veteran Affairs to ensure better welfare packages for its retirees and their families.
Spokesman of NAF, Air Commodore Edward Gabkwet who disclosed this in a statement on Saturday, said the Chief of Air Staff (CAS), Air Marshal Oladayo Amao gave the approval for the establishment of the directorate at a 2-day Conference for NAF Administrative and Medical personnel.  According to the statement, the new directorate, domiciled under the administration branch of the NAF, will also be responsible for interfacing with similar structures in sister services towards harnessing necessary benefits for NAF retirees under existing federa government programmes for veterans, among other responsibilities.
In his opening remarks, Air Marshal Amao noted that the NAF considers the state of physical and mental well-being of its personnel, which he described as an important factor in the sustenance of morale, as a force multiplier in ensuring operational effectiveness. He also pointed that the Conference was one in a series of conferences aimed at refocusing operational capabilities and bolstering personnel morale. He emphasized that the strength of any armed Service is not determined by the strength of its arsenal, but also by the professionalism of its workforce, which is largely bolstered through robust human resource management. According to him, in the last 2 months, the NAF had launched the Telemedicine portal to ensure access to prompt medical attention, whilst promoting confidence in NAF medical services for enhanced morale and productivity of personnel. He stated further that the outcome of such innovations would stimulate NAF human resource management efforts to be at par with global organizational standards and best practices.
Gabkwet said Chief of Air Staff challenged participants at the workshop to critically assess areas where the NAF was lacking regarding personnel welfare and administration and come up with workable solutions to mitigate effects on the service’s operational capabilities.
“As a highly technical service that deals with sophisticated aircraft, equipment and military hardware, maintaining a highly skilled, efficient, healthy and motivated workforce should be the hallmark of our daily activities.
“To this end, we will continue to epitomize best human resource management practices to promote our operational effectiveness” the statement quoted the Air Chief as saying.
While expressing gratitude of the NAF to President Muhammadu Buhari, for his unwavering and continued support, the CAS assured of NAF’s commitment to the successful execution of constitutional roles for a peaceful and united Nigeria.
Earlier, the Air Secretary, Air Vice Marshal Mahmud Madi had stated that the timing for the conference was apt, considering the strategic importance of the human resource in achieving organizational goals and objectives.
He also stated that the NAF has invested hugely in human capacity development and personnel welfare in recent years which has translated to tangible gains in NAF operational conducts.