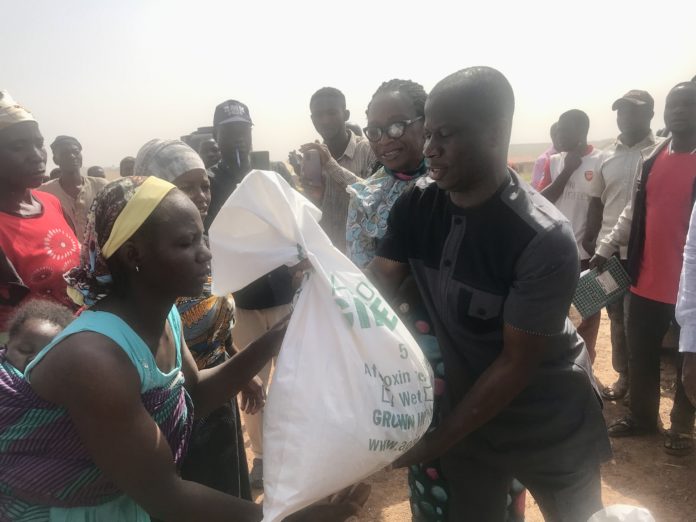 Agrolog Nigeria Ltd, has donated foodstuffs worth N20m to Internally Displaced Persons (IDPs) rendered homeless by bandits in Kaduna state.
The victims are spread across IDP camps in Chikun, Kajuru Zangon Kataf, Kaura and Jama’a Local Government Area among others.
The Managing Director and Chief Executive Officer of the company, Dr. Manzo Maigari, made the donations on Saturday in Kaduna.
He said the donations were part of the company’s social responsibility.
Maigari, a former commissioner for agriculture in Kaduna state, said the foodstuffs which included maize flour, rice, beans, palm oil, soap, toothpaste, pomade and sanity pads among others, were targeted at 10,000 families affected by deadly attacks by bandits.
He added that N2m had also been set aside for medical treatment for those who were wounded in the attacks and could not afford medication.
According to him, the company which deals in the Ginger value change, has been working with communities as partners.
He said, “Our ompany, Agrolog Ltd is basically an agric business with focus on Ginger value change.
“We introduced a social entrepreneurship model where we give small holder farmers input with credit and they pay back with ginger.
“We as a company have decided to give back to the people that we work with – the community where we do business as a company.
“This is basically a social responsibility that aims at supporting government efforts as well as that of good spirited individuals who have always been there for some of our brothers that fall victims of this banditry attacks”.
Maigari who noted that banditry attacks is a nation wide challenge, called for the support of good corporate citizens as well as individuals to support the victims.
Speaking further, he said, “We have mobilised items for the immediate needs of victims of these attacks.
“You can see behind me, packages that contains maize flour, beans, rice, palm oil, salt, maggi, pomade, toothpaste, sanitary parts and other things.
“The package is aimed at touching 10, 000 families across to communities in Chikun down to the southern part of Kaduna state.
“I will like to say that the community where we operate has decided to identify with this initiative . “For us, this is to say we need to do more and we will do our best to ensure that we live up to expectations.
“We understand clearly that government cannot do everything.
“So we necessarily must support and I call on other good spirited Nigerians to look in this direction very seriously because we have quite a number of people who have been displaced and are in dire need of survival.
“We decided to give our widow’s might to assist victims of these unfortunate attacks.
“Our budget for this, is N20m.
“Most of it is in kind as in products we packaged.
But our engagement with people on the field showed that the victims required medical support. We understand that there are people that have had to be amputated just because they couldn’t afford N2000 or N5000 for medical treatment.
“There are people who suffered fractures, there are those who require bullets to be extracted from their bodies.
“What we did was to set aside N2m as direct medical support. We are working with Radi Foundation as partners because they have been in the field supporting these people.
“Many other people have made donations through them to implement and we find them worthy parners so they are the ones that will implement the donation.
“They are the ones that have identified the IDP camps and those in need.”
Also speaking President of the Southern Kaduna Peoples Union (SOKAPU), Hon. Jonathan Asake, commended the company for the kind gesture and called on other corporate bodies and public spirited individuals to come to the aid of thousands of people rendered homeless by terrorists.
“I am overwhelmed, I am excited, I lack words to expressed my happiness on what I have witness today. I can only say thank you to Agrolog,” Asake said.
He disclosed that over 108 communities have been displaced in the Southern part of Kaduna state alone from 2020 to date.
“Some of these people just find uncomplicated buildings to live. Nobody is taking care of them. Only groups and public spirited individuals are helping them,” Asake lamented.
He said some of those who were wounded were finding it difficult to get medication “because they don’t have the resources to go to the hospital.”
Asake said children of those affected by the attacks have been out of school for a long time.
“We have a very serious humanitarian crisis in Southern Kaduna where these attacks took place.
He called on government and the authorities to come to the rescue of the communities.