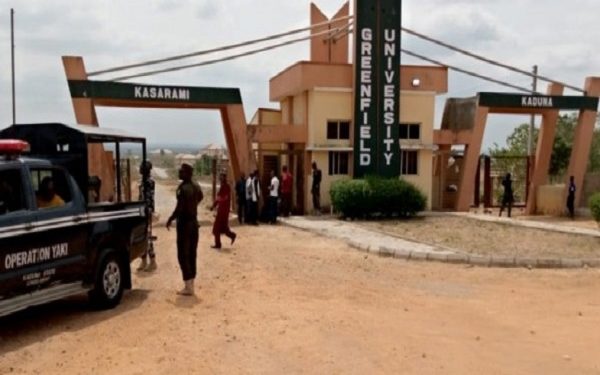 One of the parents of the abducted students of Greenfield University, Kaduna has disclosed that N180 million was paid to bandits before their abducted children were released.
The students were abducted on April 20 when bandits attacked the institution.
A video shared share by Television Continental (TVC) on social media showed two parents saying that they paid N180 million without any assistance from the government.
They said “it is unfair” that the government did not help them to pay the ransom demanded by their abductors.
“N180 million, that is what they collected from us, from parents, without the help of the government.
“None of the government officials came to our aid, since the 20th April that they took these children”, one of the parents said.
Meanwhile the university authorities said all the abducted students have been released by the bandits.
Muhammad Bashir, registrar of the university, announced this in a statement on Saturday.
Bashir said all the remaining students and non academic staff were reunited with their families.
The statement said: “As you are aware that on Tuesday, April 20th, 2021 armed bandits attacked Greenfield University and abducted 20 students and three non academic staff.
Five out of the abducted students and a male warden were grossly murdered by the bandits.
“I am pleased to inform you that today, being Saturday, May 29, 2021, all the remaining students and non academic staff have been released by the bandits and they have already been reunited with their families.
“On behalf of the Board of Trustees, University Council, Management, Staff and Students of our university,
we wish to thank all Nigerians and well wishers all over the world for standing by us during this trying times”.
The spokesman of the Kaduna state police command, Mohammad Jalige had earlier said 14 of the students were released while three were still in captivity.