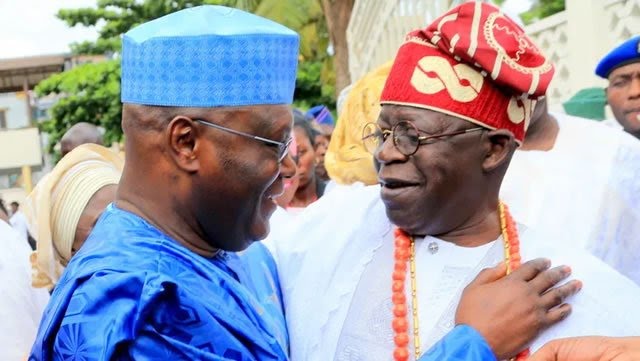 Former Vice President and Presidential candidate of the Peoples Democratic Party (PDP), Atiku Abubakar has disclosed that his political alliance with Bola Tinubu, Presidential Candidate of the All Progressives Congress (APC), was severed in 2007 over Muslim-Muslim ticket.
Abubakar stated this on Friday in an interview with Arise television.
Reacting to the Muslim-Muslim ticket of the APC Presidential candidate, Abubakar said Tinubu wanted to be his running mate when he emerged as the Presidential candidate of the defunct Action Congress of Nigeria (ACN) in 2007, but he refused.
The APC flag bearer had picked Kashim Shettima, a Muslim and a former governor of Borno, as his running mate for the 2023 elections, a development that has sparked off outrage from the Christian community in the country.
Abubakar said since then he and Tinubu have not been on the same page politically.
He said, “My fundamental disagreement and political departure with Tinubu since 2007 was due to the Muslim-Muslim ticket.
“Remember, I opted out of PDP because of zoning, and together with Asiwaju we formed ACN.
“Tinubu wanted to be my running mate when I was given the ACN presidential ticket in 2007, but I disagreed.
“And because of that, he switched his support to the late Umar Yaradua. That was the parting point.
“The Muslim-Muslim ticket has always been my fundamental disagreement. Nigeria is a multi-ethnic and multi-religious nation, and there should be a religious balance in our leadership.
“We are still friends, of course. But that doesn’t mean we won’t have political differences. “We have been having political differences ever since we became friends. Nothing unusual about that.”
The PDP Presidential candidate also spoke on the choice of Governor Ifeanyi Okowa of Delta state, as his running mate, despite the endorsement of Governor Nyesom Nwike by the PDP National Working Committee (NWC).
He explained that he did not pick Wike, as his running mate because he wanted someone he could work with amicably.
The choice of Okowa had created a friction within the party, with a group of aggrieved stakeholders insisting that Wike should be picked.
Atiku said, “Governor Wike was not rejected. Nobody was rejected in the party. But you must understand that it’s the prerogative of the candidate to pick his running mate.
“A running mate he believes he can work with amicably, and then also deliver the policies of the party, and also try to unify the country.
“Governor Wike is a brilliant politician. He is courageous, tenacious. I believe he has a future in the political evolution of this country.
“It’s not a question of rejection. Certainly, not. I think it’s too harsh a word to say that we rejected governor Wike. Certainly not.”