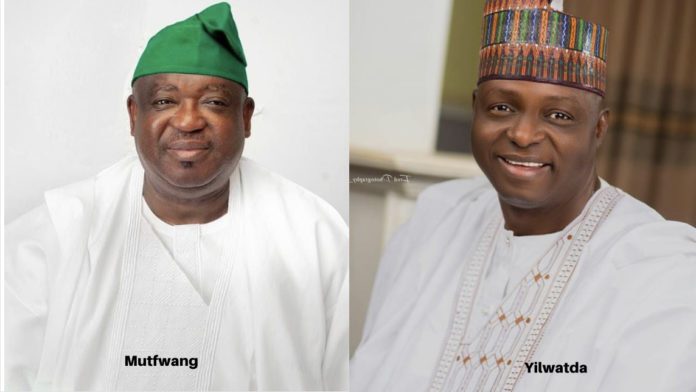 Oyale Adejo writes on the governorship candidates of the two leading political parties in Plateau state – the opposition Peoples Democratic Party (PDP) and the ruling All Progressives Congress (APC).

The build-up to the 2023 general elections is getting intense as many political parties have conducted primary elections.
All eyes are on the dominant political parties – the ruling All Progressives Congress (APC) and opposition Peoples Democratic Party (PDP).
The PDP has produced former Vice President, Atiku Abubakar as its flag bearer for the Presidential election.
The APC is still undergoing the process of nominating a candidate from its numerous aspirants, some of who include, Vice President Yemi Osinbajo, former Lagos governor, Bola Ahmed Tinubu, Rotimi Amaechi and Governor Fayemi Kayode.
In Plateau state, the situation was not different as the governorship primaries of the APC and PDP generated a lot of interest among citizens.
Plateau used to be the support base of the PDP, having governed the state for 16 years until things fell apart and it was kicked out by the APC in 2015.
Governorship election in the state is not easy to predict as  it defies analysis and permutations.
In 2015, the pattern of voting changed in the state. It was perhaps the first time that people voted for an individual rather than a political party.
This was how Governor Simon Lalong of the APC emerged,  ending 16 years of PDP rule in the state and indeed at the national level.
The same scenario seemed to be playing out. Plateau state might choose the best individual for the job and shun party affiliations.
Interestingly, candidates of both parties, Mr. Caleb Mutfwang of the PDP and Dr. Nentawe Yilwatda of the APC, are men of knowledge and experience and are qualified to govern Plateau.
Mutfwang, had been a legal practitioner based in Kaduna state.
His sojourn into politics started in 2011, when he contested to represent Mangu/Bokkos federal constituency, but failed to pick the ticket.
However, this did not dampen his spirit as he worked hard to ensure that the PDP won the seat.
This act of sportsmanship and party loyalty endeared him to the hearts of many in the area.
In 2014, he contested for the Chairmanship of Mangu Local Government Area and won massively.
However, the tenure of council chairmen in Plateau state was illegally terminated by the new administration of Governor Lalong barely a year and three months in office.
Mutfwang, alongside other council chairmen challenged this illegality in court and won.
During his brief stint as council Chairman, he made some improvements in key sectors such as education, agriculture, human development and infrastructure in Mangu.
In the area of agriculture, he subsidized fertilizer for farmers at a 40% discount. Also, his love for education led him to provide allowances for law students of Mangu origin and vacation schools, to help prepare students for SSCE. Furthermore, some salary backlogs were paid and he supervised the completion of a 5km road in Mangu region among other things.
Mutfwang has pledged to return Plateau state back to its glorious days if given the opportunity.
For this reason, he adopted the slogan, “Rebuild Plateau Project” and has outlined five strategic areas of focus.
These include; unity, human development, security, the Plateau economy and critical infrastructure. State policing and revival of operation rainbow, are at the front of his security plans.
He is not happy about the dilapidated infrastructure in various parts of the state.
He believes that rebuilding dilapidated infrastructure in the education, health, transportation and doing something about the power sector will help attract foreign investment and improve the huge tourism in Plateau.
One of the huddles he may face is the fact that he is challenging a political party which is in power.
The ruling APC will not be a push over unless the people revolt against it as they did to PDP in 2015 when they resisted attempts by former Governor Jonah Jang who imposed a relation as his successor.
He will also need to address perceptions that he lived all his life outside Plateau and has no in-depth knowledge of the real challenges facing the state.
There are speculations that he is the anointed candidate of former Governor Jonah Jang, who is allegedly plotting to pair him with his son as his deputy.
It is also being speculated that Mutfwang is being sponsored by the governor of one of the South – South states who was said to have bankrolled his election during the primary.
He will have to work on these speculations to be able to win the confidence of voters.
Dr. Yilwatda of the APC comes into the the governorship race with over 29 years working experience.
He is a former university lecturer and a former commissioner of the Independent National Electoral Commission (INEC).
Yilwatda has worked in the public and private sectors including some international development agencies.
He has adopted the slogan “Generation Next”, with emphasis on the youths on the Plateau.
He believes that in the nearest future, talents and skills will be the currency of the world.
Human development is the focal point on his agenda and he plans to focus on five key sectors namely agriculture, economy, security, education and critical infrastructure.
A major challenge for Yilwatda will be the speculation that he is the “anointed candidate” of Governor Simon Lalong.
His emergence as the flag bearer of the APC was met with protest from different stakeholders within the party. Reconciliation with such stakeholders is vital.
Plateau state is in need of good governance and inspiring leadership.
Citizens of the state are not strangers to the challenges plaguing the state.
Both candidates appear to have thorough understanding of these problems.
However, it is important that the citizens, critically engage them by asking the right questions on how they intend to fulfill their promises.