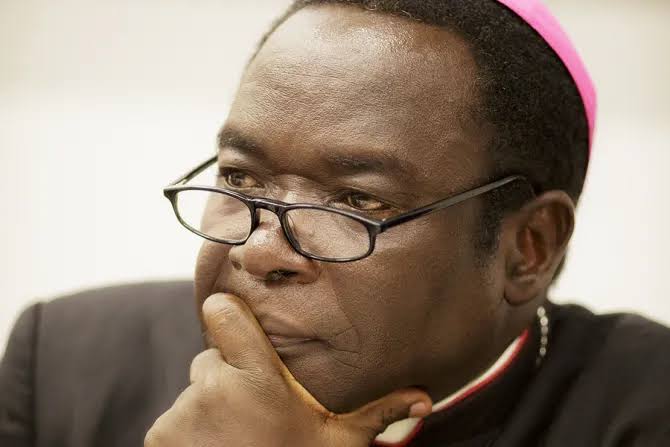 The Catholic Bishop of Sokoto diocese, Most Rev. Matthew Kukah has said that the Muslim-Muslim presidential ticket of the All Progressives Congress (APC) is totally reprehensible and setback to the country’s progress on national integration.
Speaking in an interview with Channels television on Thursday, Kukah said the Muslim-Muslim presidential ticket of 1993 election has been over-exaggerated to assume that Nigerians don’t care about religion.
He said, “As a Christian, I feel proud of the role we played in managing diversity and politics in Nigeria”.
Kukah recalled that, “In 1983, when Gen. Buhari came in as military head of state, he took Idiagbon, a Muslim as his second in command.
“Sadly, Nigerians were very excited. Maybe that is where we should have returned to as a scene of crime.
“It broke tradition, completely. The whole issue was that two Muslims from the north of the same religion would govern Nigeria, but Nigerians gave them that concession.
“I think we over-exaggerated our interpretation of what happened in 1993 because we always have this dubious assumption that it is evident that Nigerians don’t care about religion.
“But moving forward, the question I have asked my friends who are Muslims, especially those who are from northern Nigeria, is a simple question: ‘Would Muslims in Nigeria or northern Nigeria be ready to make the same concession that Christians made in 1984 and 1993?’
“And they have now been asked to make the same concession.
“You have to then understand this against the backdrop of what has happened in the last seven years.
“When you look at the squandered opportunity; when you look at the way power has been distributed; when you look at the way this government has allocated opportunities to broad spectrum of Nigeria against the wide backdrop of the crisis that we are in now, ordinarily the least we should be talking about is whether our next president should be a Christian or Muslim.
“But as a Christian, I can tell you very frankly that the decision of the APC, naturally, I felt astonished.
“I think that as a Christian, this is totally reprehensible. It is not acceptable to me, but that is the decision of the APC as a party. Perhaps, when the campaign starts, we will hear what people have to say.
“But it has just laid the foundation that has taken us back after the kind of progress we thought we have made in terms of national integration.”