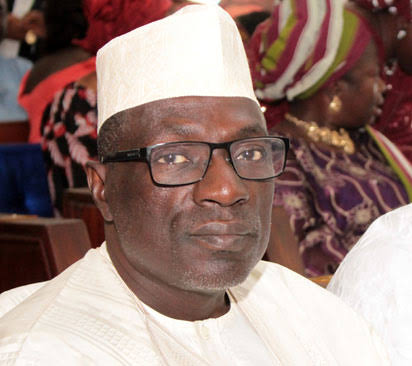 A former governor of Kaduna state, Senator Ahmed Makarfi, has said that Governor Nyesom Nwike of Rivers State should not be blamed for feeling bad about the outcome of the selection of a Presidential running mate as he has been a strong pillar of the Peoples Democratic Party (PDP).
Makarfi who spoke in an interview with some journalists in Kaduna, called on Atiku Abubakar, former Vice President and Presidential candidate of the PDP, to meet with Wike and resolve any problem that may have arisen from the choice of his running mate.
“I wont blame Wike for feeling bad because he has been one of the pillars of the party.
“Let the Presidential candidate, Atiku sit down with Wike to discuss issues because he is the only one that knows why he picked his running mate, the matter is resolvable”, he said.
Makarfi, a former National Caretaker Committee of the PDP, expressed optimism that the party will win the 2023 elections and bring back true democracy.
He said, “We have learnt our lessons and we will do more than we did when we are in power”.
Makarfi stressed that, “as long elections will hold in 2023, PDP will win, but we need to work hard for us to win in 2023.
“PDP is set to bring back true democracy back to Nigeria and we have learnt our lessons”.
Also reacting to rumours of his planned to the ruling All Progressives Congress (APC), Markarfi expressed shock, saying he was just hearing about the rumours.
He described the rumours as the figment of the imagination of jobless people, pointing out that, he has invested so much of time and energy in the PDP and will never leave.
Makarfi said the rumours may have arisen following the attendance of his son’s wedding (in London) by the opposition party.
“Honestly, I am hearing this (rumour) for the first time that I am defecting from PDP to APC and I don’t know what can be the basis (of the rumour).
“Why should I make investment in terms of time and whatever you can mention in PDP and now decoder to leave.
“Why should I go through the stress and just when we are getting it right, then I now leave the PDP for APC or any other party?
“What will be the attraction for me to leave the PDP? Well, people don’t approach me with such a rumour because they know the type of person that I am.
“If they want to come, they come to me with substance. What could be the basis? “Because in every rumour there must be a basis! Is it because members of the opposition party attended my son’s wedding and that is the basis of that rumour?
“Even people of my own political party were all there. Is this the kind of country that we want to build?
“That because people from all shades of life attend wedding ceremony or burial that they will now start flying rumour of defection?
“The rumour is the figment of the imagination of people who are jobless.
“I am a PDP member through and through. If I leave PDP, I should be retiring from politics. “And because you hold different political opinion then you now caught off all relationship with people and you want Nigeria to move forward?”
Makarfi said he continue to hold his political opinion as a member of the PDP.
“I will continue to stand by my opinion in PDP. I have stood by it long time ago and I will continue.
“People that have been galivanting between PDP and APC are known. I am in politics in PDP on principle.
“If people are moving across parties because they want to capture power or they want to enhance their financial economic position or whatever, I am still in PDP and I will continue to be in PDP and this time around, I believe we are going to be in power God’s willing in Kaduna and we shall be successful even at the national level,” he said.
Makarfi also frowned at the recent comments by former President Olusegun Obasanjo who was quoted to have said that he regretted nominating Abubakar as his running mate in 1999.
He added that it was unnecessary for the Chairman of the PDP Board of Trustee (BoT), Senator Walid Jibrin, to respond to Obasanjo, the way he did.
“What OBJ and Walid Jibril said were unnecessary and they shouldn’t have spoken in that manner.
“All we need now, is how to move our party forward for the task of forming government in 2023,” he said.