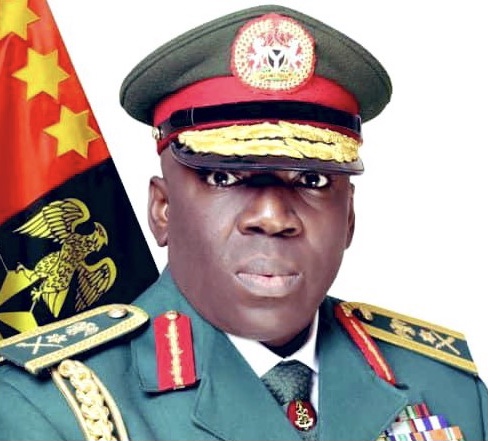 The late Chief of Army Staff (COAS), Lt. Gen. Ibrahim Attahiru and other military officers who died in an aircraft on Friday in Kaduna are to be buried on Saturday at the National Cemetery, Abuja.
Attahiru, alongside six members of his entourage and four crew members perished near the Kaduna International Airport when the military aircraft crashed as a result of heavy rainfall.
The officers, who died in the crash include Brig. Gen. MI Abdulkadir, Brig. Gen. Olayinka, Brig. Gen. Kuliya, ADC to the late COAS, Maj. LA Hayat, Maj. Hamza and Sgt. Umar.
The ill-fated flight crew members are Flt. Lt. T.O Asaniyi, Flt. Lt. AA Olufade, Sgt. Adesina and ACM Oyedepo.
The Nigerian Army, in a statement signed by the Director, Army Public Relations, Brig. Gen Mohammed Yerima, said the burial of the fallen officers would take place at the National Cemetery, Abuja.
“The burial proceedings of the Chief of Army Staff (COAS), Late Lieutenant General Ibrahim Attahiru and six other senior officers who lost their lives in an air mishap in Kaduna is slated for today Saturday, 22 May 21.
“It will commence at the National Mosque and National Christian Centre, Abuja by 1000hrs respectively”, it said.
“Consequently, the interment for the late COAS and 6 other senior officers will take place at the National Military Cemetery, Abuja today by 1300hrs”, the statement said.