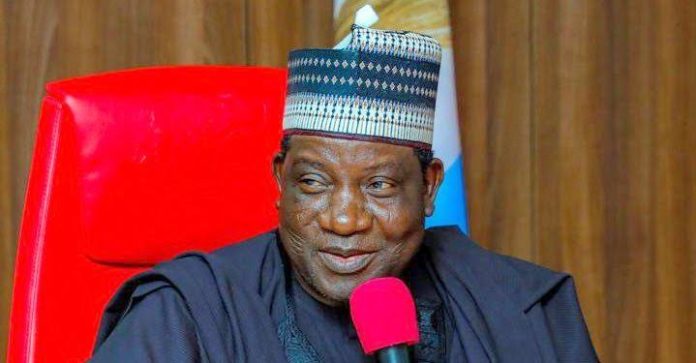 Plateau state governor, Simon Lalong, has said that those who lost out in their bids to be appointed running mate to Bola Tinubu, Presidential candidate of the ruling All Progressives Congress (APC), have resorted to promoting religious sentiments.
Speaking with State House Correspondents on Wednesday in Abuja after a meeting with President Muhammadu Buhari, Lalong said those concerned should not use him.
The governor also denied speculations that Pope Francis, head of the Catholic Church, had asked him to resign his position as the Director General of the APC Campaign Council.
Lalong said the Pope had not told him that what he is doing is bad.
“The Pope has not told me that what I am doing is bad to accept Director General.
“But generally as a governor of a state, I am not responsible for only my faith.
“In every political party, there is opportunity for you to vote for a Christian or for a Muslim.
If you don’t want a Muslim, you wait for the election day to go and vote for your choice”, the governor said.
While debunking the allegations that he lobbied for the Vice Presidential nomination, the governor said, he obtained a form to contest for senatorial election and did not lobby to be running mate to Tinubu.
“I did not lobby for VP, many people were writing and lobbying on my behalf.
“But what I wanted to be and I still stand for now, I obtained form for senate, I won, I have my senatorial ticket that I am working for.
“So if at anytime, some people wanted to be VP and lost out and they are using religion, they should not use me”, he said.
According to him, upon returning home after his appointment as the DG of the Presidential Campaign Council, he was welcomed back home by the chairman of the Plateau chapter of the Christian Association of Nigeria (CAN).
Lalong stressed that he knows where those opposed to his appointment were “coming from.”
The Bola Tinubu/Kashim Shettima Muslim-Muslim presidential ticket of the APC has been trailed by protest and condemnation, especially, by Christians who said it does not reflect the country’s religious diversity.
Several Christian groups and prominent Northern Christian members of the APC, including former speaker of the House of Representatives, Hon. Yakubu Dogara, former Secretary to the Government of the Federation (SGF), Lawal Babachir and former Vice Chancellor of the Plateau State University, Prof. Doknan Sheni among many others condemned the ticket.
The appointment of Lalong as the DG of the Campaign Council had also come under attack and protest with some groups describing him as a betrayal.