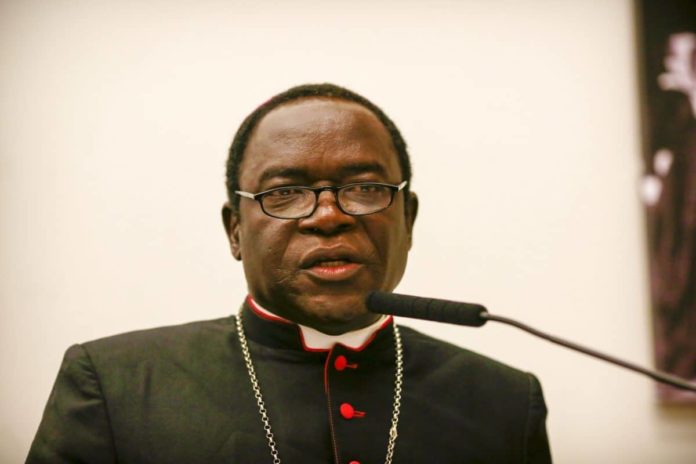 The Bishop of the Catholic Diocese of Sokoto, Rt. Rev. Mathew Hassan Kukah
has urged northern governors to address the persistent religious crisis bedevilling the region.
Speaking on Monday in Yola, Adamawa state during the inauguration of Sangere-Marghi Housing Estate, a settlement constructed to accommodate Internally Displaced Persons (IDP) displaced by Boko Haram and were taking refuge at the Catholic Diocese of Yola.
Kukah maintained that a situation where the governors meet in Kaduna or in Abuja without properly addressing the religious problems destroying the North was unacceptable.
He urged the governors to take decisive actions that would resolve the lingering religious crisis permanently in the North.
He urged the Adamawa state governor, Ahmadu Fintiri to tell his fellow governors in the North to properly guide and lead the religious leaders out of the present religious intolerance in the region.
“They should not only be talking about dialogue with Bishops, Imams and Emirs, sitting together and taking photographs and drinking tea but there should be concrete magnifications of ideas and innovations to address these problems permanently.
“If the spirit of Islam and Christianity exist in Nigeria actually between members of the two Faith, we will not be fighting, shedding blood as we are seeing today.
“Nigerians are too religious in paper and not in practice and this has made religion to be a liability to us.
“It is therefore important for both Christians and Muslims to appreciate what the Catholic Diocese of Yola has done today in bringing people of the two faith dislodged by the Boko Haram under one umbrella,” Kukah said.
In his remarks at the occasion Fintiri called on Muslims and Christians to be tolerant and live in peace with each other.
He noted that the issue of religious intolerance in the North began with the Maitatsene uprising of the 1980’s, stressing that since then, the religious crisis appeared to have defied solutions.
The governor lamented that the insurgency, kidnapping and other forms of criminality bedeviling the North were by products of the Maitatsene religious uprising that rocked almost all the states in the North.
Also speaking, the Catholic Bishop of Yola, Rt. Rev. Stephen Mamza said about 1.9 million people have been displaced as a result of the evil activities of insurgents.
He said, this had created a crisis on food, shelter, nutrition and loss of livelihood in Nigeria’s northeast.
Mamza added that the Yola Catholic Diocese have been rendering assistance in feeding and free medical care for over 3,000 families.