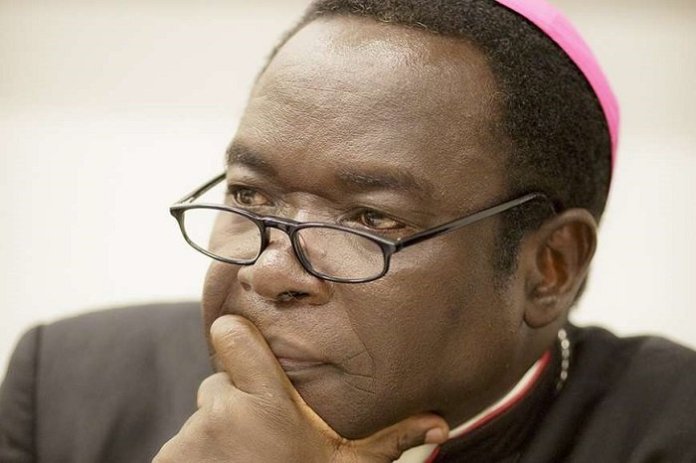 Bishop Matthew Kukah, Catholic Bishop of Sokoto has said that he is not against the government of President Muhammadu Buhari but is against the way the deplorable security and economic woes are being handled by the president.
Fielding questions from newsmen at St Barkitha Catholic Secretariat Sokoto, Kukah said, Nigeria has becoome a house of horror as bandits and insurgents terorised the people.
“Ours has become a house of horror with fear stalking our homes, highways, cities, hamlets and communities as bandits and insurgents maim lives at will,” he lamented.
Kuka also accused the president of lopsided appointments, stressing that such has caused division and agitations in the country.
He maintained that he was not bothered about which region or religion produces the president, stressing that he is only interested in good governance .
Kuka said he had a cordial relationship with President Buhari, pointing out that it was sycophants that were trying to sow seed of discord between him and the administration.
“If I pick my phone and call Mr. President now he will pick. The other time he missed my calls he called me back and we greeted. But you know some people cry more than the bereaved”, he said.
The clergy man who said he will be clocking 70 years next year, maintaining he could not be cowed when he was young and would not be afraid of speaking the truth.
He said, “In a developed country, when you speak the truth you will be celebrated. Look at how people are celebrating late Arch Bishop Desmond Tutu, but here people tag you as an enemy of government”.
He agreed with the President for refusing to assent to the Electoral Act Amendment Bill, maintaing that Buhari was right as t the issue of direct and indirect primaries should be left for political parties to decide.
“For instance, if Manchester United are playing against Arsenal it is less for them to choose who makes up their team. What they are interested in is winning, you can’t tell them the mode of selection”, he said.
He advised the National Assembly to expunge that section of direct or indirect primaries for the president to give assent to the bill.