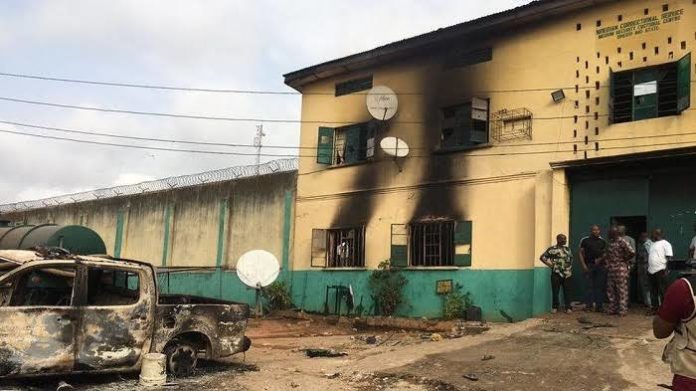 The Minister of Interior, Rauf Aregbesola has disclosed that 65 security operatives were on guard at the correctional facility in Kuje, federal capital territory (FCT), on the day it was attacked by terrorists.
The minister made the disclosure on Monday when he appeared before the House of Representatives committees on national security and interior.
Terrorists had on July 5, 2022, invaded the Kuje prison, freeing hundreds of inmates, including suspected Boko Haram insurgents.
The minister told the lawmakers that well-armed security operatives were specifically attached to the correctional centre to prevent an attack on the facility.
“In that facility on that day of the invasion were 31 military personnel of the Nigerian Army, five personnel of MOPOL 21, five personnel of MOPOL 50, two personnel of counter-terrorism unit of the Nigeria Police Force, two personnel of Kuje police division, seven personnel of Nigeria Immigration Service, three personnel of Nigeria Security and Civil Defence Corps and 10 personnel of the (NCoS) armed squad.
“These 65 people were there for the specific responsibility of assisting and preventing any attack and they were all armed.
“Because of the presence of the press here, I will not tell you the great arsenal in their possession but they were well-armed.
“If we have an exclusive arrangement, I’ll give you the specifics of the great equipment of the military arsenal that was positioned for the defence of the facility.
“However, despite everything, our arrangement for protection of Kuje failed and the facility was breached”, the minister said.
According to him, 994 inmates out of which 64 were terror suspects were Boko Haram, ISWAP and others were in prison on the day of the attack.
He said 888 inmates escaped during the attack — including 554 persons awaiting trial, 71 convicts, 36 on death row, and 17 on life imprisonment.
According to the minister, 106 inmates refused to leave the facility during the attack, while 28 inmates who left the facility voluntarily returned between July 6 and July 15, 2022.
The committee went into close door meeting after the minister’s presentation.
At the investigative hearing, security chiefs invited were absent, while some were represented.
The service chiefs invited included the National Security Adviser, Inspector-General of Police, Minister of Police Affairs, Chief of Army Staff, Chief of Naval Staff and Chief of Air Staff.
Chairman of the committee, Sha’aban Sharada, said the lawmakers will invoke their constitutional powers if the security chiefs fail to honour their invitation.
Speaking on the attack in Kuje, the lawmaker said the facility was invaded without “formidable” pushback from security operatives.
“Of grave concern is that the attack, which lasted for several hours, did not record any formidable resistance from the security personnel deployed to the facility, nor was there an adequate response from the security agencies in the FCT, despite the proximity of the Nigerian Air Force station at the international airport to the scene of incident,” he said.
The lawmaker described the attack as “very disturbing and embarrassing”, adding that it raises serious concerns about the efficiency of the security architecture in the country.