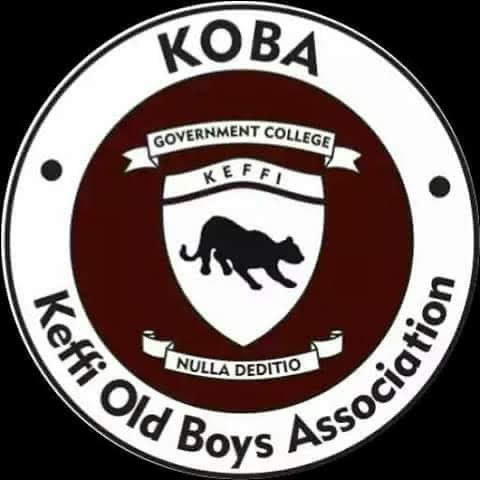 The Keffi Old Boys Association (KOBA), an umbrella body for ex- students of Government College, Keffi, has appealed to the Nasarawa state government to include the association in the implementation of policies and programmes in their alma-mater.
The association is also set to raise N1 billion to improve decaying infrastructures in the 73 year old college.
President General of KOBA, Chief Edward Ujege, stated this in an address at the annual general meeting (AGM) of
the KOBA on Friday in the college.
He said the inclusion of the association in the “implementation of programmes” in the school will ensure proper maintenance of facilities provided for the college.
The KOBA President said, the fund raising, fixed for Saturday (tomorrow) at the Shehu Musa Yar’adua Centre, Abuja is aimed at addressing the infrastructural deficit bedevilling the college.
He said since the present exco was elected in February 2019, it has been striving to address some of the challenges facing the college.
According to him, the leadership initiated a 10-point agenda as part of strategies to address the decay in the school.

Below is the full text of Ujege’s speech

It is my singular honor to address this honourable association at the occasion of 2021/2022 Annual General Meeting AGM.
I thank God for those of us that are still alive as I extend my sincere condolences to the families of those who have passed on especially during our period in office.
May I request that we observe a one-minute silence in honor of our departed colleagues.
For those who have found time to be here today, I assure you that your sacrifices are not in vain.
Our elders through chief Paul Unongo, during a Courtesy visit on him pleaded on behalf of elders the desire that we should not allow the association to die.
There is no gain saying that no association can successfully pilot its affairs without the financial contributions of its members.
It is on that premises I want to especially thank the various State chapters, sets and individuals who have paid their levies as directed by the National Executive Council without which this meeting would have been impossible.
Those that have paid their levies are the real heros of the association.
For proper accountability, documentation and appreciation, the Secretary General in his address will give details.
Your massive attendance today is in the noble spirit of sustaining KOBA for which we are exceedingly grateful.
Since our election February 2019, we have strived to break grounds to achieve goals that you will be proud of.
Some of these include:
1. We created a KOBA Secretariat and purchased office equipment.
2. We assisted in reactivating the water system in the College.
3. Numerous sets were brought back to life and some did marvelously well like set 82, set 81, set 29, to mention a few
4. Creation of different social media platforms such as (WhatsApp, facebook, Telegram) to ease dissemination and communication among members.
5. It is public knowledge that the Central Bank of Nigeria under the leadership of her Governor Mr. Godwin Emefiele at the prompting of one of us who is the Deputy Governor Central Bank of Nigeria, Chief Edward Adamu has embarked on massive reconstruction and rehabilitation of the infrastructures in Government College Keffi.
Some include: the Construction of a new Dining hall, Construction of Kaduna house, Construction of a new Clinic, Rehabilitation of Katsina Ala house and Science laboratories.
We are expecting that they will do more.
6. We have maintained a good cordial relationship with the Nasarawa State Government for which we have visited the Governor more than three times.
Today KOBA is a house hold name in the Nasarawa State Ministry of Education.
7. The National Executive Committee has held innumerable meetings to initiate programmes and policies for the progress of our Alma’mater and the association.
Some of these include:
A. Review of the Constitution
B. Registration with the Corporate Affairs Commission (CAC)
C. Sustained funding of the association by: Membership, Chapters, set registration.
D. The financial Secretary will today present a memo on funding the association.

8. Mallam Umaru Musa Yar’adua e-library.
At the last AGM, Arc. Shehu Tukur pledged the Sum of Twenty-Five Million Naira (N25,000,000.00) for the continuation of the project.
As he is the Consultant as well as the Contractor of the project, we directed that he should not pay the money into KOBA account but utilize it to continue with the work.
I have directed him to give a report on the progress he had made so far.
9. Pledges at the last AGM were not redeemed. No cash was received on that day. The Policy of this Exco is that all payments are directly made into KOBA account and withdrawals are made by the way of issuing cheque after approval is granted by the President-General.
The Treasurer will present the details of the account.
10. Ten Point Agenda.
After our inauguration, we dutifully studied the State of affairs of our alma’mater, Government College Keffi and noted the deteriorated State of affairs.
Those of us who attended the College in the 1950s, 1960s, 1970s, could not believe their eyes at the rapid deterioration of infrastructure and services when they come visiting the College.
We therefore, set up to see if we can change the state of affairs by putting: the
1. Ten-Point Agenda for the improvement of infrastructure.
2. Modification and improvement of the Policy of operating and running of the College.
With regards to improvement of infrastructure, we came up with a study that listed improvement in water supply, electricity supply, security, feeding, beds and mattresses, laboratory equipment and reagents, health care, renovation of dormitories, class-rooms and transportation.
The review of the cost of the construction and reconstruction was estimated at One Billion Naira (N1,000,000,000.00).
In order to achieve this goal, we have slated the fund raising which is coming up at the Shehu Musa Yar’adua Center Abuja on Saturday, 21st May, 2022.
11. Modification and improvement of the Policy of operating and running of the College.
Most importantly, we came up with the above draft Policy in order to permanently put to rest the ills of decay of our alma’mater.
This was based on the fact that any infrastructure will quickly go into the state of irredeemable dis-repair if standards and visions are not maintained and religiously guided.
We therefore suggested that the ownership of the College remains with the Nasarawa State Government but the Old Boys be allowed in the implementation of its policies and programmes.
To begin with, we suggested that:
1. Government College Keffi be removed from the typical Operations of Secondary Schools in Nasarawa State.
2. The review of School fees and levies
3. Appointment of high grade Principals and Staff
4. Control of Staff – Students ratio.
5. Avoidance of overcrowded Classes
6. Admission of quality Students.
The details of the above are contained in our Policy Papers which members can pay to have them.
I want to take this opportunity to congratulate recently appointed KOBA members in positions of authority not forgetting those that have been there earlier.
In addition, wish to appeal to them not to forget the plights of the younger ones with regards to employment.
Large number of the youths are roaming the streets in search of jobs, please help them.
For those needing assistance with regards to start-up or existing businesses members in position should go out of their way to offer a helping hand.

There is need to have a befitting Secretariat which members should be proud of.
At the moment we have the building which is an eye soul. We need to upgrade it by putting tiles, changing the windows and door, furnishing, POP ceiling, provision of toilet, painting etc.
The rough estimate is about eight hundred and fifty thousand naira (N850,000).
We are appealing to any Keffi member or set to assist us.
I am delighted to understand that a number of us are vying for elective positions of President of the federal republic of Nigeria, Governors, Senators, House of Representatives, State Houses of Assembly, Local Government Chairmen etc.
We particularly invited all aspirants here to express our support and prayers that their dreams will become a reality.
I therefore call on KOBA members to support our own by extending hands of fellowship to enable them succeed in their noble ambition as Government College Keffi taught us qualities of good leadership which Nigeria now desires.
May I invite all the aspirants or their representatives to stand for special recognition and prayers.
Finally, I wish to thank you once again and to employ you to enjoy your time while you are here.