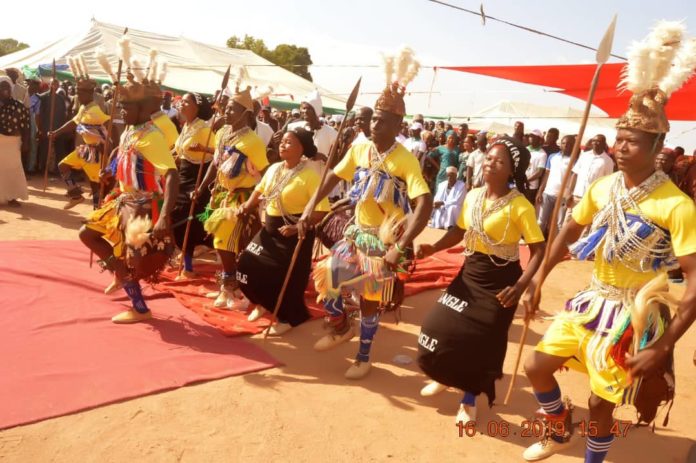 In his work, “Primitive Culture”reprinted in 1958, Edward B. Taylor (1871), defined culture as “the social behaviour and norms found in human societies, as well as the knowledge, beliefs, arts, laws, customs, capabilities, and habits of the individuals in these groups.”
This goes to say it is the summation or total lifestyle of a people and it can only be acquired through socialisation and enculturation.
Essentially, if you take away or kill a people’s culture, their identity is gone – they will no longer be identified, or be defined by the way they were doing things.
No doubt, the Tangale nation has come under attack in recent weeks, and the ultimate goal is to adulterate its culture, which will in the long run lead to the killing of the tribe; its customs, norms and traditions all together – to make Tangale go extinct, or assimilated into other cultures as in the case of some tribes.
We are aware that some languages in Nigeria, even in Gombe state have gone into extinction and many have become endangered languages. The documented ones in Gombe state, specifically Tangale-Waja include, Jalaa, Dijim, and Komta languages – according to some documents, there is hardly any known speaker of these languages – their other form of cultures like dressings, symbols, dance and festivals have long been forgotten, even by those who claim to have come from these tribes.
It is absolutely wrong for any person, institution, or government to engage in acts capable of adulterating any culture. The United Nations itself recognises the place of cultures and peoples, hence its numerous steps to promote and protect the rights of indigenous peoples and national minorities. One of its steps is the establishment of UNESCO and secondly, the marking of International Day of the World’s Indigenous Peoples celebrated 9th of August annually.
The Tangale nation is lucky, it has a distinct and visible culture, as well as an identity, which are clear.
Tangale like every nation can only survive if its culture remains alive and active. Therefore, every step must be taken by its people to zealously safeguard it.

Some menu from the Tangale culture
A number of traditions and academic works by Tangale sons including, Mr. A. D. Yelyelh, Rev. Danjuma Jacob and Mr. Bwalin Musa Bakude have captured the way of life of the Tangale people prior to the coming of the missionaries.
Also, living elderly witnesses exist, who participated in the old practices, as enumerated below, which are no longer practiced. Of course, quite a number of the items highlighted on the menu exist – they are seen and evident in all the towns and villages of Tangale, suggesting that the customs and practices are strong.

Language: Tangale people have a unique language of communicating to themselves – they can pass message to one another effectively using their language. Tangale has clear vowels and consonant phonemes (including implosive stops, prenasalized stops, and labialized consonants). There are nouns (with masculine and feminine gender), verbs, pronouns, ideophones, etc.
It is noteworthy that today, there exist a good number of people in Tangale land, who do not speak, or understand any language other than Tangale. Such people will not decode anything you say to them without an interpreter.

Leadership and politics:
According to an internet document cited in Kalkwi.tripod, the Tangale nation has for a long time have an established system of leadership and governance through its Mai system – Mai Tanglem kude (the senior Mai) and lesser Mais.
The document revealed that Tangale had 11 Mais that ruled the land prior to the coming of Europeans in 1904. There is a clear and laid down procedure of selecting Mai Tangle through the kingmakers.
Law and Justice:
Tangale ancestors had a way of settling disputes. Cases were handled at the appropriate level/courts, depending on their magnitude. Matters beyond family level were taken to the lower courts, headed by lesser Mais (District Heads) for adjudication. Major issues are taken to the higher court, headed by Mai Tanglem kude (the Chief/Head of the land).
Economy/Occupation:
Tangale people practiced agriculture for their mainstay – cultivating crops and rearing animals as a way of life. Tangale people don’t eat if they don’t work for the food. Hence, the effort by everyone to contribute their quota to the family income.
They are known to have grown corn, millet, ground nuts, bambara nuts, and beniseed, among others. They are also known to have reared chickens, goats and cows, among others. Most of these practices have continued till date.
Aside farming, the Tangale people are known to have been involved in hunting, pottery, blacksmithing and hand crafts, among others.

Medicine:
The Tangale have a way of caring for the sick and treating the injured. There are known native doctors in the land, who have handled illnesses since time immemorial. Till date many use herbs and other ingredients in treating illnesses.
When the white people came, they found out that Tangale people have an organised form of treating the sick, to the point of admitting patients. The hospitals were known as ‘Karpada’, which operated with great success rates.
Also, certain clans are known to have specialised in the treatment of particular illnesses, like snake bites, fevers, etc.
Religion: Before Christianity came to the land, Tangale ancestors believed in a supreme being – the maker of heaven and earth, whose name is Yamba. They also believe in life after death – make no mistake that these are concepts introduced by the coming of Christianity and Islam.
In in his manuscript, ‘Religion, Myth and Magic in Tangale,’ Rev. John S. Hall (1883–1953) [Rev. Hall was the first Missionary to Tangale land], edited by Herrmann Jungraithmayr, Jörg Adelberger, affirms that the Tangale believed in Yamba, who resides in the skies and is difficult to reach. He added that the people also believed in the existence of spirits, demons, etc.
The Tangale ancestors tried to reach Yamba through the worship of Yeku, as well as ‘shur la fi mana’ smaller gods kept at the backyard – today, there exist Tangale people who still go to the Yeku shrine on the hills to worship him. There are people who still keep and worship the smaller gods.
In addition, those familiar with the Tangale nation may have seen the Totem of the Tangale people, ‘Ballin’ the Snake – quite a number of traditions exist on how the snake has been spiritually fighting battles on behalf of the Tangale people.
Morality and Social Norms:
Since time immemorial, the Tangale people like other ethnic minorities believed in absolute truth, as well as right and wrong. They have been guided by set of rules and regulations that defined good and bad behaviours including stealing, killing and lying among others. These concepts were not introduced by Christianity or Islam.
The Tangale also has an established system of respect the elderly, following due process, and how to extend courtesy to visitors, among others.
Other customs and traditions:
Marriage: The Tangale have a unique way of conducting marriage following agreed rites and customs – each step is specified. Despite acculturation, the people still maintain a number of marital rites and customs.
Marriage is prohibited among relatives; you must marry from outside of your family/clan. Husband must pay rites before marriage, where the husband fails to pay and goes into marital relationship with a woman. The children born to him by the woman will not be considered his, they belong to the woman’s father, until he pays the dowry. Every item needed to be paid are specified depending on the clan the bride is coming from.
Arts: Tangale has a unique way of showcasing itself to the world through its attire, crafts, paintings, as well as distinct traditional dance and music.
To be continued…

Kure, a journalist, can be reached through: iliyakure@live.com

Nigeria is a failed state: An Analysis of the current state of the nation

Dogonyaro, the man who announced the overthrow of Gen. Buhari in 1985