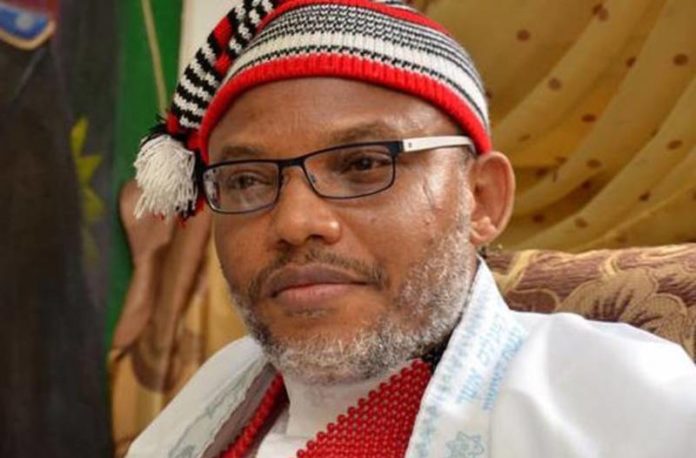 A Federal High Court, president by Justice Binta Nyako, has adjourned the trial of Nnamdi Kanu, self acclaimed leader of the Indigenous People of Biafra (IPOB), till October 21, following the failure of the Department of State Services (DSS) to produce him in court on Monday for trail. Kanu and three others are standing trial for alleged treasonable felony brought against them by the federal government over their campaign demanding for ”Republic of Biafra”.
In April 2017, the court granted Kanu bail on health grounds, however he jumped bail in September 2017 and fled the country after soldiers invaded his family house in Afaruku, Abia State.
His bail was revoked by the court and a warrant was issued for his arrest.
Kanu who was arrested in June and extradited to Nigeria to face trial, was remanded in the custody of the DSS after he was re-arraigned before the Justice Nyako.
When the matter came up for trial, the counsel to the prosecution, Mr. M. B. Abubakar, told the court that the case is for hearing and although the defendant has not yet been produced by the DSS, they are ready to proceed.
Abubakar however requested the court to proceed without a fiat taking into consideration that the court has commenced vacation and Justice Binta Nyako was not one of the vacation judges.
However, the lead counsel for the defence, Ifeanyi Ejiofor,
told the court that the DSS denied Kanu the right to meet with his relatives.
Ejiofor said he was reliably informed that Kanu has been taken out of jurisdiction of this court.
“We have been denied access to Kanu in the last 10 days. We are worried about his safety and don’t know why the federal government refused to bring him in court.”
Ejiofor also informed  the court about an application he filed, seeking the transfer of Kanu from DSS custody to a correctional centre.
Justice Nyako, held that judge the trial cannot proceed in the absence of Kanu, having been arrested and brought into the country.
She ordered that the Kanu must physically be brought to court since he is now available to face trial.
The judge ordered that access be given to lawyer to see his client.
The court also ordered that the prosecution must produce Kanu in court at the next adjourned date of October 21.
Nyako however said if the prosecution is able to get a fiat from the Chief Judge of the Federal High Court, the court can reschedule the date for next hearing.